A cheer for Pyeongchang

A cheer for Pyeongchang 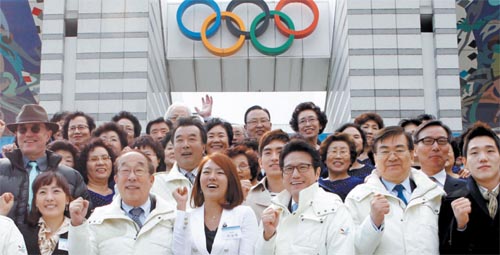 Officials of the Pyeongchang 2018 Winter Olympics bid committee pose during an event at Olympic Park in Seoul, yesterday. Head of the bid committee Cho Yang-ho (second from right in front), head of the Korean Olympic Committee Park Yong-sung (second from left in front), Minister of Culture, Sports and Tourism Choung Byoung-gug (third from right in front) and about 500 others attended the ceremony that celebrated the 100-day countdown to the International Olympic Committee vote in Durban, South Africa, that will decide the 2018 Winter Olympics host city. [YONHAP]