Intimate portrait of a fashion master

Intimate portrait of a fashion master 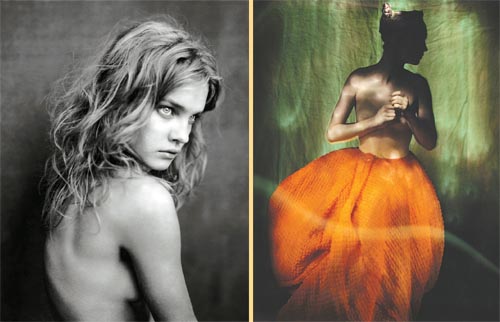 Left is “Nathalia from Back,” which Paolo Roversi shot in 2003. Right is “Audrey,” taken in 1996. Both are part of the artist’s “Photographs” exhibition at 10 Corso Como Seoul in Cheongdam-dong. Provided by Cheil Industries


While Irving Penn, Helmut Newton and Richard Avedon - three of the 20th century’s most esteemed and prolific fashion photographers - are no longer with us, their influence continues in the work of those who have inherited their legacy, including Peter Lindbergh, Paolo Roversi and Steven Meisel.

Of the three, Roversi is the first to show his work in Seoul, in an exhibition that started last Wednesday and continues through May 8 at 10 Corso Como Seoul in Cheongdam-dong, Gangnam District.

The photos represent the past two decades of his work in studio portraiture, a field he has come to dominate. Before its arrival in Seoul, the exhibition toured neighboring Beijing, Shanghai and Tokyo as well as countries around Europe.

A native of Ravenna, Italy, the 64-year-old photographer has been highly successful in tying together commercial photography and fine art. He works primarily with the 8-by-10 Polaroid format, which he says allows the images to fade, creating dreamy and often surreal effects. Unlike his contemporaries, Roversi works primarily from his studio, which since 1973 has been in Paris, rather than shooting on location.

His unusual technique and singular vision have kept him in demand, and over the past year he has shot advertising campaigns with such European luxury brands as Guerlain, Alberta Ferretti, Hermes and Cerruti and has done layouts for fashion magazines including Vogue, W and Numero.

Roversi met with the Korean press a day before the opening of his exhibition, which also marks his first trip to Korea. The following are excerpts from that meeting.


Q. You are known for shooting with a large Polaroid camera using instant 8-by-10 film. Is there a specific reason why you use this material? 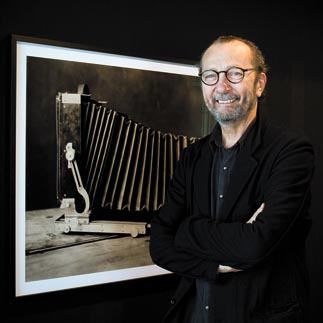 A. I’ve been fascinated by 8-by-10 film ever since it first came out in 1980. One of the biggest merits is that it allows you to develop photos slowly. That way, I can more clearly see the object taken by the camera. What I also like about Polaroid is that it doesn’t exactly reflect nature as it is. The film results in transformations of the original object that I can’t really expect, such as colors. Photography is discovery of new facts, I think. It’s not about a reproduction of facts. Polaroid helps me find a new reality and reinterpret the world.

Those shortcomings come as strengths for me. Nothing can be preserved eternally. Sometimes photos are shaken and blurry. But I accept the features as they are. One of the photos you will find at the exhibition shows an image of a green face and red hands. At first I thought it was a mistake. But I like it most of all. I just try to learn meanings from mistakes.

How did you get your start as a photographer?

I would say it was very accidental. At first I engaged myself in various artistic activities. I wrote poetry and participated in the theater. But what attracted me most eventually was photography. I began taking photos on a trip to Spain. I was amazed by the miracle created in the course of developing photos in the dark room.

Could you elaborate on what you meant by “miracle”?

I find it hard to explain how the individual photos can actually be created. Each of the photos is a miracle. Photography can halt time. Thanks to photography we can see our grandfather and great-grandfather. One of the key elements of photography is light, and light, I think, represents a life. Photography also gives us the fantasy of eternity.

You’ve said in previous interviews that you were anti-technology.

I am not really against technology since it is what makes it possible for us to take photos. But I made that comment because I think the spiritual side of photography is more important than the technical side.

You said earlier that you are not interested in reproducing reality. But the nude photos currently on display show the models without any particular visual device.

I wouldn’t say nude photos can’t necessarily reproduce reality. I do a lot of portraits - especially of young women. Nudity can best reflect the mystery of beauty, and nude photos enable me to approach beauty most easily. Portrait photography is an exchange of souls between the photographer and the object.

Who is the best model you’ve worked with?

It’s not easy to distinguish the superiority of the countless models I have photographed. But you can see a larger number of photos of certain models at the exhibition. They are the ones who inspired me more and who exchanged stronger emotions with me.

One of them seems to be Natalia Vodianova.

I love her in an artistic dimension. She is a beautiful woman both inside and out. When I first met her she was 17. Now she is a mother of three children. She is still so beautiful and there is something magical about her.

Of course. Just because time has passed doesn’t necessarily mean the moments are forgotten. Such beautiful encounters will always be remembered. They won’t only be left in the films but also in my mind. My mind is the film.

Who are the most memorable designers you have collaborated with?

You can see a woman with a red hat in a photo at the exhibition and the model is Sasha Robertson in a Yohji Yamamoto dress. It has a great meaning to me since it is the first photo where I used light with color. My perspective of photography changed through this photo, and I started enjoying using colors in photos.

What is the most important thing about fashion photography?

Fashion is something that changes consistently. It is renewed with a new outfit, hairstyle, makeup and model in a matter of six months. I would compare it to a high-speed train, and since the speed is so fast you have to do your best to get in. Take a compartment at the front, not at the back.

*Paolo Roversi’s “Photographs” exhibition began on March 23 and will continue until May 8 on the 10th floor of 10 Corso Como Seoul, Cheongdam-dong, southern Seoul. Admission is free, but because the show contains nudity, under-aged viewers are prohibited. For more, call (02) 3018-1010 or visit http://10corsocomo.co.kr/.