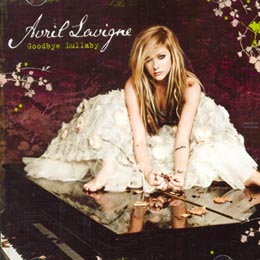 In 2002, when she was just 17-years-old, Avril Lavigne made it big with songs about star-crossed teen romance - “Sk8er boi” - and how “Complicated” relationships can be. Since then, the Canadian singer-songwriter has released three other albums, gotten married and gone through a divorce.

Her latest album, “Goodbye Lullaby,” is her fourth and it is her first after breaking it off with ex-husband Deryck Whibley, lead singer and guitarist of Sum 41.

The breakup seems to have had an effect on the love-hate nature of her songs, but unfortunately the music in this album is too predictable to be profound. The appeal of lead single “What the Hell” decreases in direct proportion to the number of hand-clapping cheerleader rants and screeches that are present throughout.

Still there is more to this album than meets the eye. Slow to midtempo tunes like “Everybody Hurts” and “Goodbye” reveal the fragile emotions behind the tough girl in that first single. The songs could have been even better if Lavigne had put more effort into her lyrics. “I Love You” is catchy but the lyrics are pretty juvenile: “Hey, do you feel, do you feel me/ Do you feel what I feel too/ Do you need, do you need me.”

Die-hard fans will be happy to hear she is playing her first concert in Seoul on May 5.