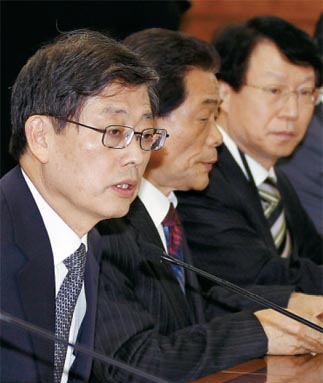 Prime Minister Kim Hwang-sik, front, speaks at a meeting at which Seoul decided to continue expanding its nuclear reactor capacity.

Despite fears about nuclear radiation in Japan, Korea will continue to expand its nuclear reactor capacity to maintain stable energy supplies and fight against climate change, the government said yesterday after holding a meeting on the issue among related ministries.

Prime Minister Kim Hwang-sik said the government plans comprehensive tests on all of the nation’s 21 nuclear reactors and related facilities by the end of next month.

Priority will be given to nuclear reactors that have been operating for over 20 years, including those at Gori in Busan and Wolseong in Gyeongju.

The government will shut down any nuclear reactor if it needs to be inspected further or if any problems are found.

The government has already said it will require all new nuclear plants to be able to withstand a 7.0-magnitude earthquake instead of the existing 6.5-magnitude specifications. 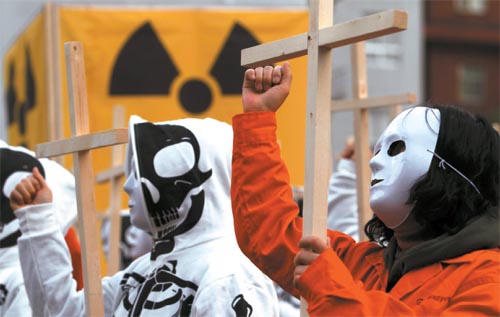 Environmentalists rally against nuclear power in front of Myeongdong Cathedral in central Seoul on the 32th anniversary of the Three Mile Island nuclear power accident. [YONHAP]


Korea Hydro and Nuclear Power, which operates the nuclear plants, says there have been no major accidents since the reactors began operating in 1978 and that emissions of radiation in the most recently reported years of 2008 and 2009 were below the global average.

Knowledge Economy Minister Choi Joong-kyung said yesterday that “though the nuclear energy industry has been hit hard by the crisis in Japan, Korea will keep promoting nuclear construction and operations.”

The government’s stance on nuclear power has been met with criticism by 14 opposition lawmakers, including Chung Dong-young, a member of the Democratic Party’s Supreme Council, and Kwon Young-ghil, floor leader of the Democratic Labor Party, who submitted a resolution to the National Assembly urging the government to scrap its plans to build additional nuclear plants. There are seven new facilities being built in Gori, Wolseong, and Uljin.