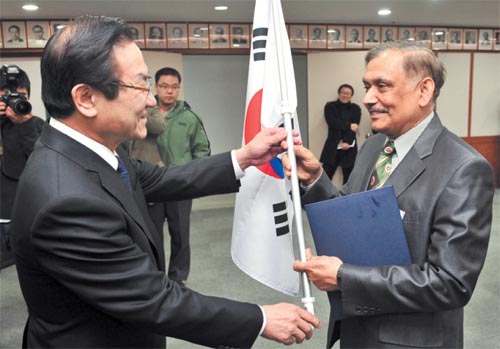 
When a young Indian man named Roy Alok Kumar arrived in Korea 31 years ago to study on a Korean scholarship, he only intended to stay for a few years and planned to go back to India after completing his studies.

Until he fell in love with Korea, that is.

“Life is a journey and one passes through many gates,” Kumar said in an interview with Korea JoongAng Daily. “It took me 30 years to approach this puzzle of who I am. During all those years my thinking matured and so did the attitude of Korean society toward people like me. I thought that it should be my address, too.”

Kumar, 55, saluted the Korean flag during his citizenship ceremony in Seoul on Jan. 24.

“I’ve paid my taxes for 30 years, but still, when it comes down to it, I’m a foreigner,” Kumar said. “It’s like I’d come into the Korean yard, but I hadn’t been given the key to the house. In order to have a better life, I thought I should become a citizen.”

The Ministry of Justice announced in January that the number of foreigners naturalized as Korean citizens surpassed the 100,000 mark, 63 years after the Korean government was formed in 1948.

A Taiwanese man was the first foreigner to receive Korean citizenship 44 years ago.

The world’s 15th largest economy by gross domestic product, according to the International Monetary Fund, is struggling to overcome a low birthrate and a rapidly graying population.

Korea’s birthrate is among the lowest in the world at 1.24, far below the global average of 2.52.

Statistics Korea has forecasted that 40 percent of the Korean population will over 65 in 2050. 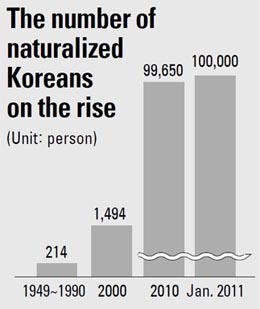 The two statistics have pushed the Lee Myung-bak administration to embrace “open immigration policies” that allow dual citizenship and the increase of foreign manpower like professor Kumar as part of an effort to grow the population.

Kumar, who is married to a Korean and has two daughters, was able to gain Korean citizenship after 31 years, while still maintaining his Indian nationality.

Kumar said the new regulation made it easier for him to obtain Korean citizenship.

Before the open immigration policy was launched this year, only foreigners who lived between three and five consecutive years in Korea were eligible to apply for naturalization.

Under Korean law, a person who has a domicile address in Korea for more than five consecutive years is eligible to apply for naturalization. 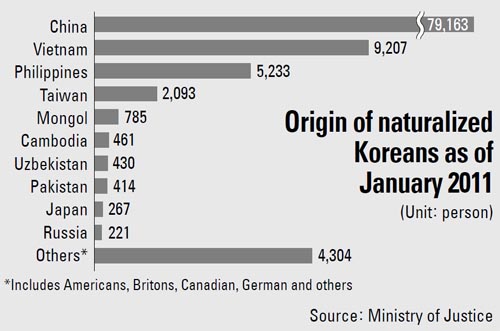 And, a foreigner married to a Korean is eligible to apply for simplified naturalization, which offers the same benefits but simply has a different name.

Korea previously banned dual citizenship, and when turning 19, a person with different nationalities had to decide whether he or she wanted to be Korean or another nationality. The measure was designed by the Roh Moo-hyun administration to put an end to draft-dodging scandals.

But the Lee administration chose a different path, believing that open immigration policies would help Korea rejuvenate its aging society.

“As of the end of December 2010, the number of foreigners in Korea surpassed 1.25 million people, marking 2.5 percent of the population,” Prime Minister Kim Hwang-sik said during a January Foreign Policy Committee meeting, which coordinates the various ministries’ foreigner-related policies.

“If we don’t push immigration policies without thorough preparation, our next generation will shoulder the burden. The government must come up with systematic measures to support foreigners because they are expected to increase in line with Korea’s economic development.”

Among naturalized citizens since 1948, Chinese make up the largest group with 79,163, or 79 percent of the total, followed by Vietnamese with 9,207. There were 5,233 Filipinos and 2,093 Taiwanese. Very few from the West have been naturalized.

The Justice Ministry said the increase is largely due to the growing influx of marriage immigrants from Southeast Asian nations and immigration laws that allow Chinese nationals of Korean background to acquire Korean citizenship.

Seo Min-soo, a 39-year-old former Nepalese migrant-worker-turned-businessman who runs a restaurant in Seoul, said there are benefits to obtaining Korean citizenship.

“Things changed a lot after I obtained my Korean nationality, I mean in a good way,” Seo said.

“When I present my Korean identification card at banks to consult on business loans and on other occasions when I need advice, I get different treatment,” Seo added.

Seo had many ups and downs in the past, until he become a Korean national, and he said he still remembers the hardships.

Seo, who formerly used his Nepalese name Binod Kunwor, came to Korea as a migrant worker in 1992.

He worked hard at a dyehouse in Uijeongbu, Gyeonggi, but received a meager salary of 320,000 won ($285) per month. Seo originally intended to go back to Nepal after completing his one-year as a legal worker, but he chose to stay illegally because he wanted to earn money for one more extra year.

So, Seo worked at several dyehouses in Uijeongbu. During the 1997 Asian financial crisis, he worked as a manual laborer at construction sites and he met a Korean woman.

Seo, however, was deported to Nepal in 1999 after he was caught working illegally. Seo and Lee were married in Nepal in 2000 and then re-entered Korea.

Seo carved out a living as a textile-mill worker during the day and devoted his nights exporting Korean clothes sold in Dongdaemun Market to Nepal.

“We encounter the other side of difficulties after obtaining Korean nationality,” Seo said. “I’m officially Korean but when I talk to people they still see and treat me as a foreigner because of my accent and different skin color.”

Seo said improving the educational environment for children born into multiethnic families should be the government’s priority.

“Children born into multiethnic families like ours only learn Korean culture and they don’t learn the culture of their father’s or mother’s country when they’re enrolled in elementary school,” Seo said.

“Children need to be exposed to different cultures starting from when they are in day-care centers and preschools so they can embrace two different backgrounds. I and many others agonize over our children’s education,” he said.

Seo said the government must build schools where children with multiethnic parents and their peers born from Korean parents can learn together about other countries.

Seo is opposed to the idea of building schools for multiethnic children because they could be isolated from Korean society.

“We don’t have information on which schools offer multiethnic education,” Seo said.

Critics say the government should establish an immigration administration if it wants to make open immigration policy successful.

“To embrace multiethnic arrangements in conservative Korean society and to keep strife between different cultures to a minimum, we need an immigration administration as a control tower, charting immigration policies,” said Chung Ki-seon, a senior researcher at the Seoul office of the International Organization for Migration.

Chung, who’s also an adviser for the Prime Minister’s Office’s Foreign Policy Committee, said that while the Ministry of Gender Equality and Family supports multiethnic families, the Ministry of Education, Science and Technology is in charge of multiethnic education in schools.

“But when their mothers become fully adapted to living in Korea, they find jobs and the Ministry of Labor assists their needs,” Chung said. “Ministries run bureaus dealing with foreigners and multiethnic families but they should be integrated into the administration.”

Chung said the committee’s task is limited because the Foreign Policy Committee holds a meeting twice a year and invites cabinet ministers and outside experts.

“The committee is not a decision-making body,” Chung said. “In 2050, the Korean population will experience enormous changes due to a low birthrate and aging society.

“We shouldn’t only talk about bringing marriage immigrants here but also discuss and do research about how and who we should welcome. We need to calculate the social costs of new neighbors, too,” Chung added.

Kumar said the Korean government needs to think about Korea some 20 and 30 years from now.

“Having a foreign bride or groom in the family may not be somebody else’s reality,” Kumar said.

“This is how developed societies all over the world, including America and Europe, have handled this challenge. Korea should learn from their experiences. Let every city in Korea be a Silicon Valley.”