Do-it-yourself CEOs fashion their own image

Do-it-yourself CEOs fashion their own image


Online clothing retailers have evolved from trend followers to trendsetters.

In the process, a new breed of celebrities has been born, vaulting the companies’ CEOs and models into the public eye.

To survive, online retailers have branched out from simply selling clothing and accessories to providing style advice and inspirations using music, blog links and user forums. Many now offer a sense of community.

Also, rather than plainly depicting what they sell, online retailers employ highly sought-after models to show off their products in everyday situations - whether it’s drinking coffee at a chic cafe in Gangnam or walking through the financial district in Yeouido wearing a sleek Bottega Veneta suit. Those models often become celebrities in their own right.

Online shopping sites here can be so closely tied to their owners’ lifestyles that some of the most successful Internet entrepreneurs get their start after their personal blogs become popular. And many of them are well-known enough that they model their own products.

But as this new breed of Internet shopping takes over the market, critics say consumers are favoring style at the expense of quality.

Many of these online clothing retailers resell low-quality goods from inexpensive wholesale markets and hike up their prices after paying a high-profile model to pose in the clothes.

Park Jun-sung, right, poses for a photo for the spring collection of Mutnam. Park is CEO and a model of the online shopping site, one of the top men’s online retailers in Korea. By Lee Chan-weon


Clad in a sleek, tailored blazer and matching maroon-colored shoes, Park Jun-sung sat relaxed, posing with a cup of coffee while flipping through an issue of GQ magazine. Next to him stood two other smartly dressed men, while a photographer shot them on a terrace cafe in Seongdong District, eastern Seoul.

Amidst the flashing lights, passersby stared at Park as though he were a celebrity. And in some ways he is.

The three men were at the cafe for a photo shoot for the spring collection of Mutnam (www.mutnam.com), one of Korea’s top ranking online clothing retailers for men. Mutnam boasts around 350,000 registered members, and Park is its CEO as well as one of its models. Starting in 2005 with only 700,000 won ($625) in startup money, Park has now turned Mutnam into a force in the overheated online retail market. His annual revenues top 23 billion won.

The 31-year-old says Mutnam is more than an online clothing retailer.

“Through these photos, we are trying to convey a lifestyle trend. It’s not about selling lots of products at cheap prices anymore,” said Park. “We try to imitate everyday life moments in these photos with our own edginess mixed in, whether it is sipping tea at a chic cafe in Gangnam or walking down the streets of Yeouido among a myriad of men in suits.”

With the success of Mutnam, Park has found himself thrust into the public eye. He has been featured in numerous articles and has his own fans.

Over the last decade, online retailers in Korea have evolved from simple vendors to trendsetters. This phenomenon has produced a new breed of celebrities, including retailer CEOs, models, or as in Park’s case, CEO-cum-model.

The trend, which experts say started three years ago, is spreading fast. More e-commerce CEOs are taking a hands-on approach by modeling their products themselves.

According to Choi Jae-yong, director of Korea Social Media Agency and an e-commerce professor at Anyang University, the phenomenon stems from cutthroat competition in the online fashion market.

“Korea’s online shopping has been growing at a rapid speed, and [growth] reached its peak in 2001. The success of early online shopping sites led to a slew of other such shopping and auction sites,” he said. 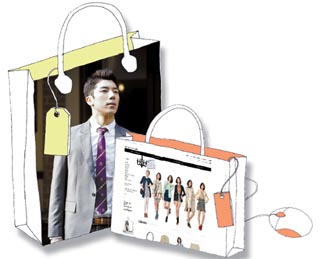 On average, the number of online shopping sites has doubled annually from 2000 to 2005, according to data by the Korea Online Shopping Association (Kolsa). The same data says that from 2006 until the present, the number increased 10 percent yearly.

In 2009, there was a 38 percent leap compared to the previous year, which experts attribute to young people opening online retail sites, because they have relatively low start-up costs.

Kim Yun-tae, director of Kolsa, tallied the total number of online retail sites at around 57,000 as of 2010. Around 70 percent are in the fashion sector.

In such a heavily saturated market, experts say that business savvy owners of online shopping sites are luring consumers by appealing to their sense of style, rather than focusing on price competition.

Instead of simply depicting their items, these retailers create an ambience of their on their Web sites. The top ranking online fashion retailers set the mood and trigger consumerist desire for visitors with background music, style tips and links to fashion blogs.

“For online shopping sites now, their crucial selling point is their image, rather than actual items. The stylish, trendsetting images they present translate directly into better sales figures,” said Bae Jung-hyun, editor in chief of Nylon Korea and author of six books on shopping.

According to experts, in many cases, a well-coordinated outfit on a popular online shopping site will be priced at up to 10 times its original value.

Online shopping in Korea is so intertwined with some proprietors’ lifestyles that some of these successful Internet retail CEOs actually get their start after finding their blogs or personal home pages explode in popularity among netizens.

One case in point is Kang Hee-jae, CEO of the online site Uptown Girl. Kang first garnered the attention of local netizens back in 2003 when photos she posted on her Cyworld home page - most taken in everyday settings in fashionable clothing - were noticed by fashion bloggers. Using this attention to her advantage, Kang launched Uptown Girl the next year. With the site’s success, the home shopping channel GS Shop created a fashion brand in collaboration with Kang, called Uptown Girl by Kang Hee-jae, in 2005.

Jeon Kyung-jin is another online retail star whose personal Web page launched her career as head of an Internet shopping site. Jeon’s Cyworld page still receives a barrage of regular postings and replies from people asking what clothing labels she wears. The Cyworld page has an average of 4,000 visitors a day, many of whom are faithful customers of her shopping site Happy Mania.

Oh Dan-bi, a 27-year-old office worker, said that she is heavily reliant on her favorite online fashion site, Beny&Hizzin, for daily style advice.

“Beny&Hizzin is more than just an ordinary shopping site to me. I visit the site not only to check out new arrivals, but to listen to the background music or to check up on things like concert information,” said Oh. 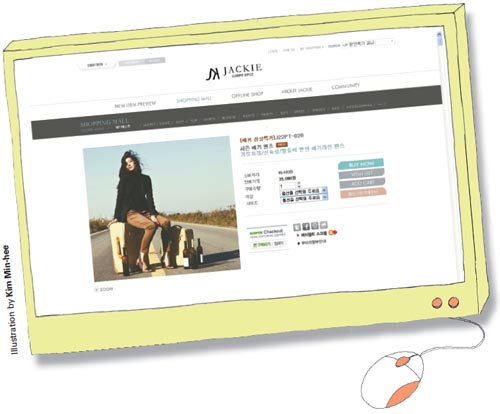 A photo from Jackie, an online clothing retailer

Another intriguing effect of this phenomenon is the public’s embrace of the models and CEOs of top Internet fashion sites as a new type of celebrity.

One of the first examples of this trend was Kim Ye-jin, CEO of the popular online retailer Liphop. She is nicknamed the “400 million won girl,” referring to her annual income through Liphop.

Launched in 2003, Liphop was one of the first sites to use photos of models in everyday outdoor situations. Besides appearances on television and in print, Kim, like a true modern celebrity, became embroiled in controversy in 2008 over semi-nude photos she posted on her site.

Some local celebrities even got their start as fitting models for online fashion sites. Goo Ha-ra from the girl group Kara, and Suzy from another popular girl group, Miss A, both gained recognition as models for online retailers before becoming famous entertainers.

With this, many of the more well-known fitting models get larger paychecks than professional fashion models who work for major fashion labels. According to Koo Min-soo, head of an online fitting model agency, Fittingmodel.com, the top fitting models earn over 100 million won per year.

If anything, their high incomes suggest that online fitting models play a crucial role in creating an image that makes all the difference on the balance sheets.

Mutnam’s Park says that his business is highly dependent on the image his fitting models convey.

“In 2008, one of my fitting models wore a black T-shirt, and it was not selling well. Sales for that shirt were 15 percent lower than the average amount of orders for my shirts,” he said.

“So I changed the model and shot the photos again. Soon afterwards, sales picked up dramatically, up more than 30 percent from before. Before long, the shirts were sold out,” Park added.

Fashion stylist Seo Jung-eun says that how a fitting model looks wearing the clothes for sale has become more important than the clothing itself.

“When customers look at snapshots of these fitting models, they imagine themselves in these clothes, looking as fabulous as the models do,” she said.

“Most of my customers are married women in their 30s, but they want to look like they are still in their 20s,” said Joo.

“The model was only 28-years-old, but my customers complained the clothes looked dull and old on her. After I switched her with a 22-year-old model, they began to open up their wallets again.”

As this new breed of Internet shopping takes over the market, style and presentation are becoming more important than the quality of the clothes themselves. Around 80 percent of small- and mid-sized online shopping sites in Korea sell clothing they buy from inexpensive, wholesale markets - mainly from Dongdaemun or factories in China, according to Park Gwang-rok, a professor in the Department of Fashion Shopping Malls at Taekyeung College.

Because of this, prices of similar products vary wildly online, depending on the site’s popularity.

It’s easy to stumble upon the same item of clothing listed at various prices on these sites. One safari jacket, with the same jewel design and fabric, goes for 119,800 won on Dahong, a popular online shopping site, while it goes for 105,000 won on another site. On 11st Street, an auction Web site, the jacket was priced at only 58,000 won.

Although these price variations are not uncommon at brick and mortar stores, customers react much faster to online price gaps.

Last summer, netizens launched a boycott of Uptown Girl because of its relatively high price tags compared to the quality of the clothing.

“You can find those clothes anywhere in Dongdaemun for a fraction of the price. They just decorate their products with words like ‘luxury.’ It’s pathetic,” said one blogger from the networking community 82cook.com on the condition of anonymity.

Another issue is that many of these online retailers sell copycat clothing, with design elements taken from famous luxury designers.

Uptown Girl features items with titles such as “A Marc Jacobs-inspired dress” or “Isabel Marant-inspired drapery skirt.” Other online fashion sites are bolder. At one clothing retail site, Pilotis, for example, designer rip-offs are displayed. A flower print Miu Miu dress goes for only 82,800 won.

Local experts warn that such practices create a black eye for the local fashion industry.

“We see more products being sold online that lack any sort of creativity or identity,” said Jung Du-young, a fashion designer and creative director of local menswear brand VanHartHomme.

Nevertheless, online shopping fanatics like Oh say there is no substitute for the new breed of Internet shopping sites.

“Beny&Hizzin is like an old friend of mine. Through the site, I can open up and connect to other fashionable people. The site has helped me find my own style and fashion identity,” said Oh.