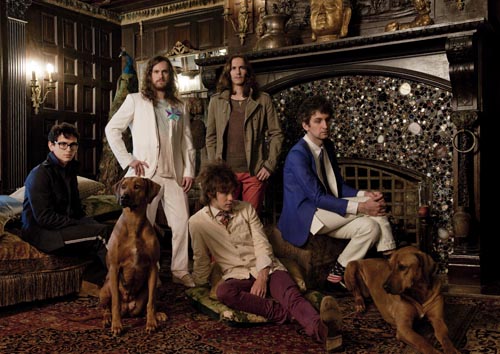 MGMT performs at AX-Korea tomorrow. Famous for their mix of psychedelic, synthpop and indie rock, the band has been a major hit with young listeners since the release of their first album “Oracular Spectacular” in 2007. See MUSIC. Provided by AX-Korea

Tomorrow: It’s a bit hard to describe MGMT, comprised of duo Andrew VanWyngarden and Ben Goldwasser. Their musical style is a mix of psychedelic, synthpop and indie rock, and their music videos almost always border on the bizarre. But that doesn’t change the fact that MGMT has been extremely popular with young listeners since the group first burst onto the scene in 2007 with their first major album “Oracular Spectacular,” which was released to much critical acclaim. Since then, the duo has been nominated for three Grammy Awards and went on to release their second major album, “Congratulations,” last year.

April 8: The Korea Festival Ensemble will perform pieces by Elgar, Schubert, Offenback and Brahms for this concert, which is held in memory of British cellist Jacqueline du Pre. Included in the program are Elgar’s “Saud d’amour,” Offenbach’s “Les larmes de Jacqueline” and Brahm’s Sonata for Cello & Piano No. 2 in F Major, Op. 97.

April 10: The Chamber Music Society of Kumho Art Hall plays a program that includes Debussy’s Sonata for flute, harp and viola, L.137, and Dvorak’s Piano Quintet No. 2 in A Major, Op. 81.

April 12: American R&B singer Eric Benet is returning to Korea following the November release of his new album “Lost in Time.” Benet has received three Grammy Award nominations in the R&B category and won the Naacp Image Award in 2000 for his duet “Spend My Life With You,” with Canadian R&B and soul singer-songwriter Tamia. The song spent three weeks on the top of Billboard’s Hip-Hop and R&B Songs chart.

April 19 to 20: American recording artist and nine-time Grammy-winner John Legend is coming to Korea. Legend got his start recording with artists such as Alicia Keys, on “You Don’t Know My Name.” His first album, “Get Lifted,” came out in 2004.

Until August 15: The first Korean-language performance of “Jekyll and Hyde” was in 2004. Since then, it has been a favorite with Korean audiences. Cho Seung-woo and three other actors alternate in the title role.

April 9 to 10: This performance highlights the talents of the National Dance Company of Korea’s Lee Jung-yun. The program features Lee’s new work “Eternal Dance” and a duet by Lee and Kim Juwon of the Korea National Ballet. Lee is joined on stage by the Universal Ballet Company’s Hwang Hye-min and LDP Dance Company’s Shin Chang-ho, Nam Goong-yun and Lee Sang-eun.

April 14 to 15: The Seoul Metropolitan Dance Theater presents its version of Tchaikovsky’s “Swan Lake.” This production, set in ancient Korea in Manchuria, blends elements of traditional Korean dance - including a sword dance, a flower dance and a fan dance - with more traditional ballet and modern dance choreography.

To April 24: “Monte Cristo” is a musical retelling of Alexandre Dumas’ 1844 novel “The Count of Monte Cristo.” The story follows Edmond Dantes, an honest sailor who is wrongfully arrested during his engagement party for being a traitor to his country. To carry out his plan for revenge, Dantes transforms himself into the mysterious and wealthy Count of Monte Cristo.

April 6 to May 29: Cirque du Soleil returns to Korea for the first time in three years with a new production, “Varekei,” which is based on the Greek myth of Icarus. To tell the tale, the world-renowned troupe employs spectacular costumes, intricate sets, a multi-layered soundscape and its usual high flying mixture of circus tricks and acrobatic choreography.

To April 17: This play, directed by Oh Tae-suk, blends mask-dance styles from different regions of Korea to tell the story of a young lion named Geum-hwa who transforms herself into a human being, falls in love and learns that being human is not as easy as she thought it would be.

To Tomorrow: This annual art and music festival presents a collection of performances by international musicians like the British Hilliard Ensemble, Heiner Goebbels’ Music Theater, and winners of the Tongyeong International Music Festival competition.

The festival gets its title, “Moving Dimension,” from “Dimensionen,” a piece by Korean-German composer Isang Yun (1917-1995), who served as the inspiration for the festival. The festival focuses on promoting young Asian composers and is led by artistic director Alexander Liebreich, the primary conductor and artistic director of the Munich Chamber Orchestra. Performance times vary.