Min Yong-kun’s directorial debut, “Re-encounter,” tells the story of a young couple who fall in love, conceive a baby, break up and meet again to search for their abandoned child. In these stills from the film, Hye-hwa looks at a photo of her baby (left), and Hye-hwa and Han-su talk to Hye-hwa’s mother about the pregnancy (right). Provided by Indie Story


In a world where everything comes and goes quickly, just a handful of films stay at the box office for more than a month. But one Korean film, “Re-encounter,” has had the kind of staying power that most producers dream about. Released on Feb. 17, the film is still playing at local theaters.

In many ways, the film mirrors the success of another film, “Late Blossom,” that was released the same day and is still playing in theaters.

But other than their release date, the two films don’t seem to have much in common that would provide clues to their success.

“Re-encounter” is a coming-of-age story about two young people who fall in love but lose contact when the girl becomes pregnant and the boy leaves her to go to Canada; they meet again after five years to look for their child, who they believe has been adopted. 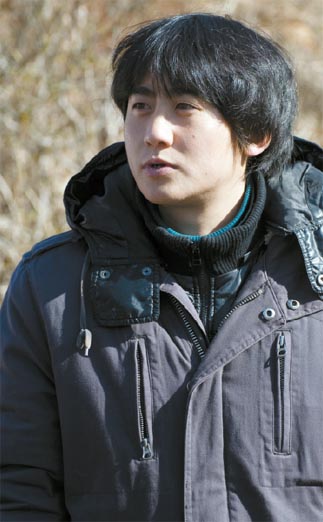 “Late Blossom” is about two elderly couples and the romance between them.

As of late March, “Re-encounter” had attracted 10,000 viewers, which means “the film has hit it big” for an indie, said Jang Sun-young, an official at Jin Jin Pictures, an indie film distributor. The film is a rare triumph in the world of indie film, where low production budgets and short runs in the theater are the norm. But the director of “Re-encounter,” Min Yong-kun, who is making his directorial debut, seems to have found a good formula for success. He spoke by telephone with the Korea JoongAng Daily to talk about the film and the challenges of making it as an independent artist.

Q. It was interesting to hear at the February press screening that you didn’t want your film to become an instant hit but rather a sleeper hit. What did you mean by that? And how do you feel about the rave reviews the film has received?

A. For small films like mine, the most important thing is word-of-mouth advertising (because of the film’s small budget). No matter how good a film is, it won’t earn money if it’s not playing in theaters, so I was hoping the film would have a long run.

“Re-encounter” is a coming-of-age story about a difficult subject. Why do you think it has been so popular with audiences?

Unlike blockbuster films, this film is lyrical and delicate. I guess it strikes a chord with the audience.

What inspired you to write the story?

I met a woman from an animal rights group when I was working as an assistant director for a documentary program on KBS in 2004. She tried to rescue an abandoned, ailing dog but was unable to and these big fat tears started rolling down her cheeks. I had a feeling that she was crying not for the dog but because she had a wounded heart and the dog was just a catalyst. It inspired me to want to write a story about people who seem to be okay on the surface but have internal scars.

The film mostly takes place in a run-down village, where Hye-hwa (the female lead) often goes to rescue abandoned dogs, and was shot during the cold months from December to February last year. Did you have any difficulties because of the location or weather?

The village was chosen because of its desolate and run-down look, but after one heavy snow, we had about a meter (3.3 feet) of snow and the village turned into a romantic place. We were all bewildered and had to postpone the shoot until all the snow melted.

In the film, Hye-hwa takes care of a dozen abandoned dogs, including two that are disabled. Where are the dogs now?

We borrowed the dogs from an animal shelter. But because dogs that are returned to the shelter are killed if they’re not adopted, all the dogs were adopted by members of our staff.

It seems like a lot of successful indie films have been released in the first half of this year, including “Bleak Night,” “The Journals of Musan,” “No Name Stars” and “Miracle on Jongno Street.” Why do you think there has been such a flood of good indie films?

Last year and the year before were tough times for the indie film industry because of funding problems (with the government) and other issues. We had to spend our time on things other than filmmaking. It naturally put distance between us and the audience, but I expect to see audiences for these films increase.