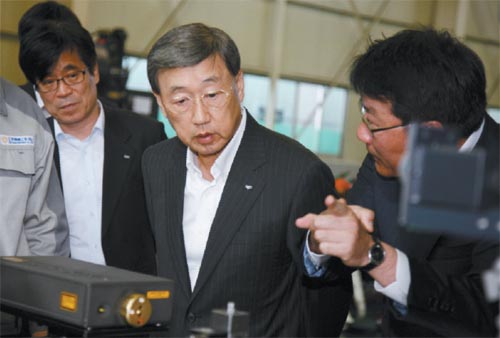 
Doosan has started emphasizing the importance of cooperative development.

Park Yong-hyun, Doosan Group chairman, said, “In global competition, it is impossible for any company to develop on its own. Companies should share development.”

Doosan is setting up a cooperative development plan that enables a virtuous circle partnership with subcontractors.

A virtuous circle partnership means that Doosan will have keen interest in developing a cooperative relationship and work together to improve the competitiveness of the cooperating company. With this, Doosan’s competitiveness will also be enhanced.

Doosan is preparing various activities to support subcontractors through its co-development support team.

The subcontractors will look over the production and management system together with Doosan, and Doosan will deliver its high-level technology and management methods in return.

In addition, it will reinforce support in all sectors, including financial, raw materials and financial operations.

This will increase the cooperative development fund and support welfare.

Doosan is also operating a co-development reinforcement unit with the subcontractors for each of its subsidiaries every quarter.

Through this window, communication has also improved because the company is listening to the opinions of the companies and sharing their difficulties.

There is also a consulting menu on the company’s Web site, where the company receives opinions and reports.

There is also a service that provides updates on the status of complaints or opinions received within 24 hours.

Doosan Heavy Industries has also established a job training consortium with cooperative-company employees and has conducted technique and function training in 23 fields, including welding.

Moreover, Doosan Heavy Industries plans to increase its training to 5,500 people among 230 subcontractors, and the staff-training course for newly employed staff will be lengthened to 12 weeks from the current eight-week course.

The Doosan’s co-development plan is also promoted overseas. When the group builds a new factory or expands its factory overseas, it decides to take action together with subcontractors rather than expanding or building on its own.

At Doosan Infracore’s Yantai factory in China, there are already 30 subcontractors receiving education and service to help them settle in China.

Once Doosan Infracore’s Suzhou factory is completed, even more subcontractors are expected to receive benefits.

The four companies will contribute working expenses each year for the foundation and the foundation will help out first and second subcontractors as well as small and medium companies in the machinery industry.

The co-development promotion foundation will be founded in April and officially kicks off in July.