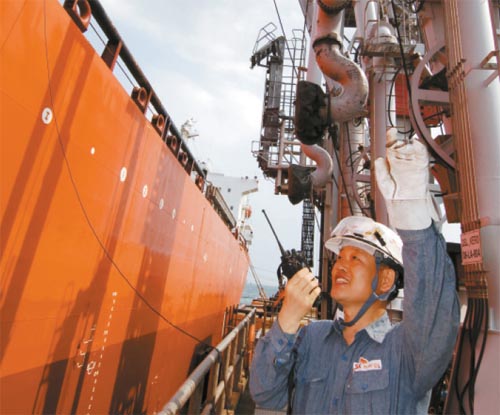 An SK Innovation employee works on an oil tanker. SK has provided energy assistance to Japan following the devastating earthquake and tsunami there.

The 2 million barrels were supposed to be used at the JX Nippon Oil & Energy refinery in the northeast region of Japan, but the factory was shut down and the oil was a burden for JX Holdings. SK Innovation also agreed to review purchasing additional crude oil.

Moreover, because Japan is restricting the amount each person can buy at gas stations and is suffering from lack of supply, SK Innovation by early April will also supply 260,000 barrels of gasoline to Japan, or about a quarter of the country’s daily consumption.

“We have a shortage of crude oil storage facilities and all of our products have been contracted for exports, but we decided to work with Japan to help them recover from the earthquake,” SK Innovation said in a statement.

The company also said, “JX Nippon Oil & Energy has sent a thank you letter for the purchase of the 2 million barrels of crude oil and exporting 260,000 barrels of gasoline.”

SK Innovation will also supply 10,000 tons of fuel oil to a Japanese utility company in the northeast region of Japan and fuel for fishing ships as requested by a Japanese fishery association.

In addition, SK Innovation said it will cooperate as much as it can to meet requests for support from other oil refinery companies in Japan.

During his visit to JX Nippon Oil & Energy on March 16, Koo also visited SK’s Tokyo headquarters and encouraged and thanked the employees there for working hard even in difficult cirumstances.