Required on motorways: Seat belts for all passengers

Required on motorways: Seat belts for all passengers 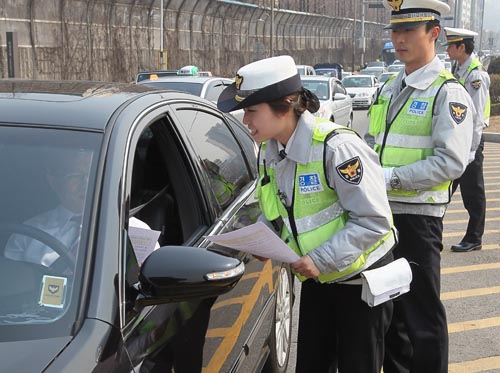 Police hand out leaflets yesterday to drivers at Banpo Bridge in Seoul. The leaflets are about a new seat belt regulation for all passengers on motorways. [YONHAP]

Under the new regulation, all passengers of vehicles, including those sitting in the back seats, must put on seat belts when they are on a motorway, a measure aimed at reducing casualties in traffic accidents, said the NPA. Offenders will be fined 30,000 won ($27), said the NPA

There are 120 motorways in the country for only motorized vehicles, which are allowed to run at a maximum speed of 90 kilometers per hour.

Currently, the all-passenger rule is applied only to inter-city express buses running on motorways, so back-seat passengers of sedans do not have to wear safety belts. Police said the measure was taken because the country’s traffic fatality rate on motorways is as high as on highways. The fatality rate of traffic accidents on highways was 10.6 percent in 2009 when 9,636 people were injured and 397 were killed in 3,748 accidents.