Saddle up and ride on into the sunset

Saddle up and ride on into the sunset 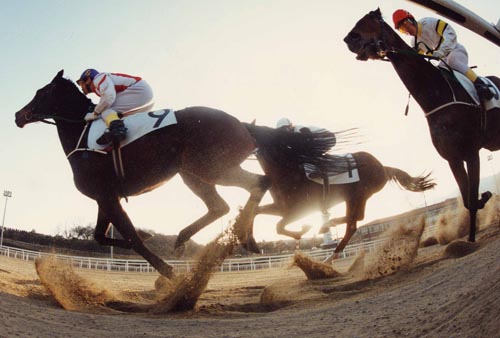 
Horseback riding has long been considered a sport for the wealthy or professional sportsmen, but with many Korean dramas featuring equestrian scenes, more and more people are saddling up for lessons.

In the KBS drama “Boys Over Flowers” (2009), leading man Yoon Ji-hoo (Kim Hyun-joong) woos his lady love with a romantic horseback ride on the beach at sunset, which caused young women across the country to swoon in delight.

Romance and horseback riding also play a role in the 2009 drama “The Man Called God.” In the story, Bo-bae (Han Chae-young) and Woo-hyun (Kim Min-jong) have crushes on friends who are already involved in relationships and plot to steal away the objects of their affection while they are out on a date at a horseback riding club.

But dreaming about such romantic encounters and actually having the skills to pull it off gracefully are two entirely different things, and one would certainly not want to fall out of the saddle at a crucial moment.

Not to worry. Several horseback riding schools have sprung up around the country to teach these valuable skills. And as the owner of one such school says, it doesn’t take as much time or effort to learn how to ride a horse as people might think.

According to Hong Sang-tae, owner of Samkwang Horseback Riding Club, in Pocheon, Gyeonggi (where this reporter is currently a student), new riders can usually have their horse walking and trotting like professionals after just a few lessons and can have the horse running after 10 to 15 lessons.

Once rider and horse are comfortable enough with one another to jump these hurdles, the fun really begins, he says. Still, Hong cautions prospective riders against thinking that riding is too easy.

“People start horseback riding because they think it’s cool, but it’s actually a whole-body sport that takes quite a lot of energy and focus,” he said, adding that physical energy is just as important as mental focus when riding a horse.

“Riders need to focus their full attention on riding when on the back of a horse, which helps you focus on what you are doing at that moment and can even help you improve your focus in other areas of your life,” he said. “That’s why horse riding is frequently used to rehabilitate the mentally challenged, but there are benefits for ordinary people, too.”

Hong sat down with the Korea JoongAng Daily to offer a few how-tos about horseback riding. 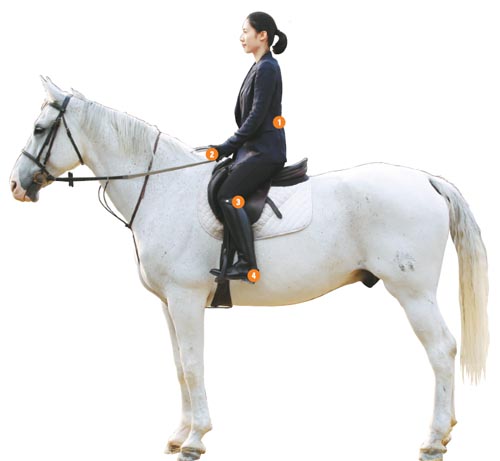 Correct posture is the key to horseback riding for beginners. [ILGAN SPORTS]

In the first session at his or any school, Hong says that new students typically learn the correct posture for horseback riding and how to control the horse. Then they practice having the horse walk and trot.

But the most important thing to remember is that, unlike other sports, horse riding requires a strong connection with the animal. The rider needs to take the lead in controlling the horse so that the animal will stop and go at the rider’s command.

Riders should also remember that horses can sense fear. And as much as you might be afraid to sit atop a horse, horses are also afraid of having someone who is not in control of his or her fears be in control of them. The rider needs to be confident and sure of herself before getting into the saddle.

A horse will also test a new rider, so it is the rider’s job to give the horse positive or negative reinforcement based on the horse’s behavior. The rider can stroke the horse’s mane when it does something good or pull the reins tight when it refuses to follow instructions.

When you sit on a horse, correct posture is important. The first thing to do is make sure you are holding the reins tightly. Keep both hands about 10 centimeters (about 4 inches) apart and 10 centimeters above the horse’s back at all times. Elbows should be bent slightly, at a 120 degree angle, but the arms should be relaxed.

The feet should tilt upward slightly in the stirrups and the knees should be bent. People tend to shift their weight into their toes as the horse speeds up, but that will cause the feet to fall out of the stirrups.

The back should be kept straight and the rider should avoid leaning forward, which disrupts the center of gravity and could put you off balance.

As the horse starts to walk, keep your eyes up and look in the direction you are heading.

To keep your balance, squeeze your legs around the horse as if hugging it with your legs. Hold the reins tightly, so even if you fall, you will be dangling on the side of the horse instead of being thrown down to the ground, which increases the risk of being stepped on.

Hong says that they usually see about two or three people fall off a horse per year, but that most accidents result in nothing more serious than a few bumps and bruises. 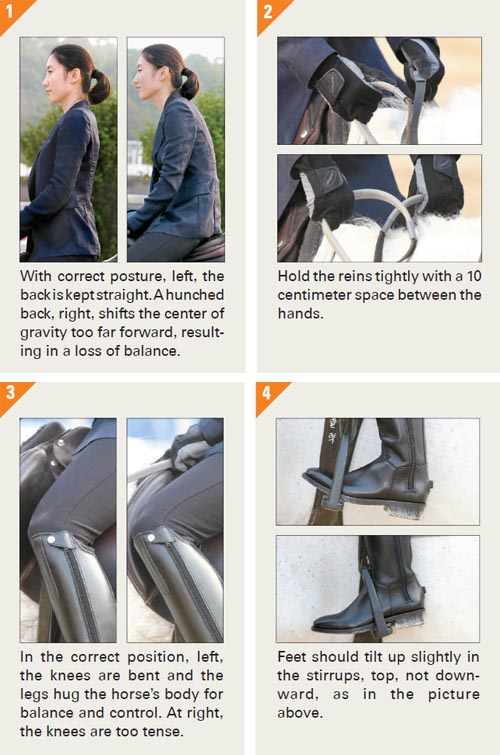 Most schools or clubs have equestrian gear, including helmets, calf chaps, gloves, safety vests and saddles. For comfort and safety, stretch jeans are recommended. Cargo pants are not recommended since they create friction between a rider’s legs and the horse’s body.

Teaching methods vary greatly from school to school and will also depend on the purpose of the lesson - whether it is for professional training or leisure - so one of the most important things to remember when choosing a school is the teacher-student relationship and the overall feel of the school.

Compare horse riding fees and the distance from your home. If driving is not an option, some horseback riding schools can be reached by public transportation, but most require at least two transfers and at least two hours of travel one way.

The cost of horse riding is not much different than that of tennis lessons or a monthly gym membership, since people usually go horseback riding once a week.

The fee differs based on whether a rider wants lessons or just wants to go for a ride.