Identity matters with seals and signatures

Identity matters with seals and signatures 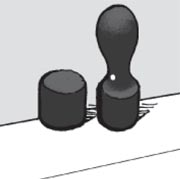 The use of a seal as a form of identification and a symbol of status and authority goes back to ancient times. In 4,000 B.C., the Sumerians in Mesopotamia used a stamp engraved on a clay cylinder. In 3,000 B.C., Egyptians created signet rings that had seals on them.

The oldest seal in China was discovered in Yinxu, the ancient capital of the Yin Dynasty (1600 to 1046 B.C.). The system of the official seal was established during the reign of Emperor Qin Shihuang. An official titled “Fujie Ling” was in charge of overseeing various official seals of the court. The seal used by the emperor was called Xi, or the great seal. Before Emperor Qin, emperors used seals made of clay or ceramic, but Emperor Qin was the first to use stamps made of jade. During the Han Dynasty, officials kept government seals on a string around their waists. Today, the Chinese still say, “He will be wearing a stamp around his waist” when someone enters government service.

The heyday of seals was in medieval Europe. Seals were no longer used exclusively by kings and aristocrats. Universities, guilds and individuals began to use them as well.

Signatures began to replace seals in the 15th and 16th centuries. The use of signatures was seen as a more sophisticated form of identification among intellectuals who knew how to read and write. The benefit of the signature was that it could not easily be forged by people who couldn’t write, while seals and stamps could be stolen and fabricated by anyone.

The Joseon Dynasty, too, had a history with signatures. Aristocratic yangban families wrote their name and title on contracts and signed letters instead of using a seal. Those who couldn’t write used what was called a “hand signature.” A person would draw an outline of one finger - the middle finger on the left hand for men and the middle finger on the right hand for women.

The system of using registered seals, or ingam, was introduced in Korea in 1914 and is to be abolished next year. The only official means of authenticating a document will be an original signature. This measure was taken to prevent ingam forgery and fabrication and to follow the trend of using signatures. But is a signature really safe from forgery or fabrication? Perhaps we have to think like Joseon Dynasty politician Yi Hang-bok - who punctured small holes with a needle at both ends of his signature to prevent against forgery - and come up with more clever ways of ensuring that signatures are authentic.