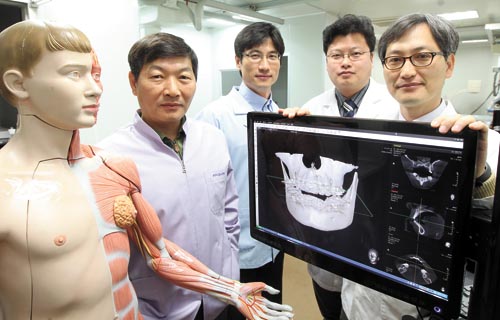 Members of the Body Identification Team of the National Forensic Service show an X-ray of teeth, used to identify a body after a disaster. From left to right, Lee Yang-han, Lee Gyeong-rak, Lee Sang-seop and the team leader Yang Gyeong-rok. By Kim Sang-seon


A team of experts from the National Forensic Service recently returned from a mission in New Zealand, where their Body Identification Team helped identify the remains of victims of the devastating Feb. 22 earthquake that took the lives of over 180 people.

On the 56th anniversary of the National Forensic Service on March 25, the JoongAng Ilbo met with the members of the Body Identification Team that spent eight days in Christchurch with teams from seven other countries.

The team is made up of four experts in forensic medicine, forensic dentistry, genetic studies and data analysis.

It was not the first time the Body Identification Team spent time in a disaster area overseas.

“The [National Forensic Service] has dispatched us to many disaster areas nationwide and worldwide in the past,” said Yang Gyeong-mu, the 43-year-old leader of the team.

The team was involved in identifying bodies after the Sampoong Department Store disaster in 1995, which killed 501 people after the structure collapsed. The team was also dispatched to Southeast Asia after the deadly 2006 tsunami.

To positively identify a body, the four investigators have to identify two criteria.

The forensic doctor conducts an autopsy to determine if any surgeries had been performed, the forensic dentist examines the teeth, the genetic expert extracts DNA, and another person checks the body’s belongings and fingerprints, Yang said.

“Although it is tough for us to work abroad, we understand it is important for Korea to build international partnerships with other countries,” Yang said.

Thanks to their vast experience in domestic disasters, the team is now recognized in the international community, Yang said.

“We have been through many massive accidents, such as the Sampoong Department Store collapse, a fire at C-Land in 1999, and a subway disaster in Daegu in 2003 that killed 198 people,” Yang said.

“In the case of New Zealand, its prime minister specifically asked the National Forensic Service to dispatch our team there,” he added.

Lee Sang-seop, a forensic medicine expert, said, “The initial purpose of the team was to identify Korean expatriates in foreign countries, but now we help international communities in other ways.”

The team said it is ready to do what it can to help Japan after the 9.0-magnitude earthquake on March 11, causing a massive tsunami and nuclear crisis. Authorities estimate that the death toll could climb to 18,000 people.

“We feel an obligation to do what we can to help in Japan,” said Yang. “We are ready to depart to Japan as soon as the Japanese government asks us to help.”