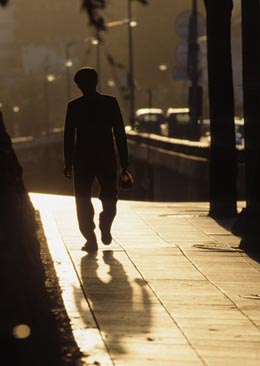 In Korea’s aging society, more and more people who can’t bare their unhappy lives with their spouses are deciding to divorce in their 50s, 60s and even 70s, anxious to begin anew.

A 54-year-old businessman who divorced in 2006 recently joined Couple.net, a matchmaking company in Seoul that connects not only young people but single older people.

“Although it’s a little bit embarrassing for me, a man in his 50s, to join a matchmaking company and try to find a girlfriend, I wanted to meet someone who has a similar educational background, financial status and personality,” he said on the condition of anonymity during an interview with the Korea JoongAng Daily. “My 86-year-old mother eagerly cheered me on to sign up with the company, and my two sons in their 20s didn’t oppose it as well.

“If I find the one with whom I want to spend the rest of my life, I could remarry,” he said. 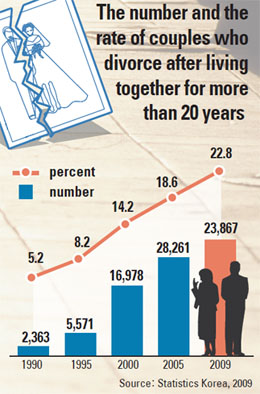 “These days, people have become more tolerant of divorce,” said Lee In-chul, a divorce lawyer. “The growth of individualism in Korean society has also led many older people to think they have to find their own happiness, free from an unhappy marriage.

“Since the law for the right to claim asset division was enacted in 1991, which requires a husband to give about half of his assets to his wife when they divorce apart from alimony, housewives don’t feel much burden about their lives after divorcing, leading to more divorces among older people,” Lee added.

The issue of so-called “gray” divorce drew the public’s attention when a 77-year-old woman won her divorce lawsuit on March 13. The Supreme Court upheld the lower court’s ruling that her divorce from her 81-year-old husband be granted and that he should give her 290 million won ($264,477) of his assets as a divorce settlement.

Married in 1969, the couple had lots of quarrels during their marriage due to personality differences.

Since 2003, the couple hadn’t had any conversations and just exchanged notes to communicate in their daily lives, even though they lived together. The husband usually ordered her by writing notes such as, “Don’t attend church and focus on household chores” or “Don’t put too much tofu in the bean soup.”

Finally, in August 2008, the woman’s husband gripped her by the front of her shirt and wounded her because she hadn’t given him a side dish he liked for a meal. She immediately left the house and filed for divorce.

“Many housewives who devoted themselves to their husbands and children want to have their own lives free from their family,” Lee said.

“Old couples have the tendency not to talk about their dissatisfaction with their spouses for a long time and suddenly they burst out, leading to divorce.”

Matchmaking companies have turned their attention to the growing trend of gray divorce. The matchmaking company Couple.net said the number of older clients jumped three times over the past 10 years.

“Among about 30,000 members we have now, clients older than 50 years is more than 600, a big increase from past decades,” said James Lee, CEO of the company. “We have noticed the growing number of old singles and expect the number will rise in the upcoming future, due to our aging society.

“But still,” the CEO said, “many children oppose their parents’ remarriages because of problems in the division of inheritance or because they are socially uncomfortable. Most of our older clients choose to have a date or meet a sincere friend, not necessarily for remarrying.”

Jeong Shin-sook, an official of the Program Center for Aging Society in the Planned Population Federation of Korea, which offers phone counseling services for older people, agreed that single, elderly people aren’t in a hurry to remarry. “We got a call from children whose father was having a date with somebody, but they were worried that the person would be aiming to get at his assets,” Jeong said. “Support of an elderly person’s children is one of the crucial factors for the elderly in making the decision to remarry.”

Jeong said the center has been running a free group meeting for couples since last year.

“We held the first group date for single older people last year, which they liked a lot,” said Jeong, who added that a second meeting will be held this month.

While some succeed in finding happiness in their second lives, others, especially husbands, forced into divorce by their unhappy wives, have trouble adjusting to living alone.

In April 2006, an 82-year-old man who divorced in 2003 hung himself in Seongbuk-dong, Seoul, leaving behind a suicide note saying that “living alone is too hard to me.”

“Most gray divorces in Korea are decided by women who can’t stand patriarchal husbands anymore,” said Choi Sook-hee, a professor at Hanyang Cyber University. “While women do relatively well, getting along with friends, family and neighbors, many Korean men, forced to divorce, suffer loneliness and need someone who can take care of their health and meals.”

Choi said the increasing number of older singles could be another burden for the government.

“Medical and financial support from the government and civic organizations are needed for the single elderly,” Choi said. “But the first thing to do is to prevent couples from breaking up in their old age, by having various public programs to aid communication among couples.”