How safe are nuclear reactors in Korea?

How safe are nuclear reactors in Korea? 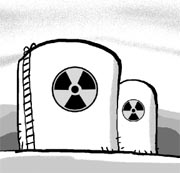 Since the emergence of nuclear power plants in the late 1960s, there have been suspicions about their safety. At the time, the heart of the controversy was whether the emergency cooling system could prevent a meltdown of the core when the reactor went out of order.

This conundrum is illustrated in the 1979 American film “The China Syndrome,” which tells of the confrontation between the government, which tries to cover up safety problems at a nuclear power plant, and a female journalist who works to uncover the truth. The title of the film is based on a hypothesis announced in 1971 by American atomic physicist Ralph Lapp, who proposed that if the core of a nuclear reactor in the United States melted, the radioactive material would penetrate the earth and even contaminate China. The antipode of the U.S. is, of course, not China, but India. But the phrase “China syndrome” originated from the hypothesis nevertheless.

Later, Lapp’s hypothesis was proven groundless by physicists who concluded that it was not possible for radioactive material to penetrate the earth no matter what the circumstances. But the idea was not easily erased. Then, two weeks after the release of “The China Syndrome,” a lethal amount of radioactive material leaked at the Three Mile Island nuclear plant in Pennsylvania. The public’s fear of nuclear power grew and U.S. nuclear policy was shaken.

The more open to the flow of information a country is, the more serious the public’s uneasiness about sensitive issues can be. These days, social networks are the breeding grounds for exchanges of unverified information. One good example is the widespread circulation of an essay written by Norio Hirai after the leakage of the Fukushima Daiichi nuclear power plant. Hirai worked at nuclear power plants and later wrote of the risks of the destruction of nuclear power plants by earthquakes or accidents, before he died of cancer in 1997. Although the content of the essay was proven false when it was published more than 10 years ago, it is redeployed whenever the nuclear issue rises.

Are the nuclear reactors in Korea that were built more than 30 years ago safe? Will the easterly wind that sometimes blows in April bring radioactive material from the Fukushima Daiichi plant to the Korean Peninsula? Sometimes ignorance can be bliss but saying that nuclear power is safe without a proper explanation of the attendant risks is no longer acceptable.