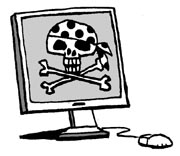 A pirated work is something copied or sold without authorization of the author. Until the 19th century, unauthorized publication of artists’ works was common. Then, the International Association of Literature and Arts, of which Victor Hugo was a founding member, initiated a campaign to prevent such acts. That led to the birth of the Berne Convention for the Protection of Literary and Artistic Works, which was adopted in Bern in 1886 and asserted that an author’s copyright should be protected for 50 years after his or her death.

At present, there are 164 countries that are party to it. South Korea became a signatory to the convention in 1996, China in 1992, and North Korea in 2003. Nevertheless, international copyright violations continue.

Although remarkable progress has been made in the fields of intellectual property protection in South Korea in the meantime, the country is still under suspicion of violations. Nowadays, copyright piracy occurs more often in music, movies and animation than books. The more serious concern is software piracy. In South Korea, the software industry is weak, partly because of piracy. Even if people were to take pains to develop software, the software industry would not be profitable because no one wants to pay for software. The Economist Intelligence Unit, an economic and business research arm of The Economist, ranked South Korea’s competitiveness in the IT industry at third in the world in 2007. It gave good marks to Korea’s high-speed internet network and highly developed IT hardware technology. But the country’s rank fell to the 8th place in 2004 and 16th place in 2009. The main reason for the fall was due to pirated software in Korea.

In 1994, the software piracy rate in Korea was as high as 75 percent. In 2009, after 15 years, it was down to 41 percent. On Monday, private organizations, including the Korea Software Property-Right Council, adopted “Vision 20/20,” which laid out plans for lowering the rate to 20 percent by 2020. According to the council, if software piracy were banned, some 800 billion won in revenue would be gained per year, and some 10,000 jobs would be created. In order to accomplish that target, we must first get rid of the perception that those who steal knowledge are not thieves. And parents who boast that their children can download everything for free because they are good with the Internet need to teach their children that intellectual piracy is wrong.