Is your smartphone posing a security risk?

Is your smartphone posing a security risk? 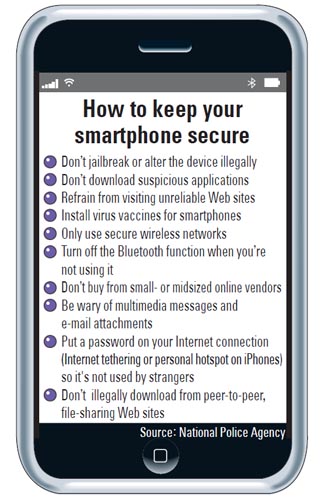 Most computer users wouldn’t dream of leaving their desktop or laptop open to attacks by viruses and malware.

Guess what? Your smartphone is just as vulnerable to cyberattacks. Not only that, you never had to worry about leaving your desktop computer in a taxi or at a bar, but that can happen with a smartphone. And then a stranger could have all the highly personal data you carry around on your mobile devices.

As the wonders of mobile computing start sinking in with consumers, so are the anxieties. And in Korea, security awareness for mobile devices is almost nonexistent. But the risks are real.

A case in point: Reports surfaced yesterday that an early version of Kakao Talk, one of the most downloaded apps in Korea, is vulnerable to major cyberattacks. Kakao is a mobile messenger service through which people can send and receive messages on cellular as well as on Wi-Fi networks for free.

Wins Technet, a local network information security company, said that the 1.3.4 version of Kakao Talk for smartphones, which runs on Google’s Android operating system, was found to have a security flaw that allows hackers to intercept messages when a Wi-Fi network is used.

“If it is proven to be true, I don’t think I’ll use [Kakao] from now on,” said Joyce Shin, a 28-year-old Kakao aficionado who works in the electronics industry. Shin says her messages can contain personal and even intimate information. “I think people tend to be more open and frank because the app works on their very own handset.” she said.

Upon Win Technet’s advice last week, Kakao reportedly ditched that version of the app, which was being used by 1 percent of the 10 million Kakao users.

“We advise our users to always upgrade the app to the latest version, which not only contains new functions but also necessary measures for security,” a Kakao official said.

The Kakao glitch highlights a larger threat: smartphones are increasingly becoming targets for hackers all over the world.

According to California-based Symantec, the largest maker of computers security software, known vulnerabilities in mobile operating systems rose from 115 in 2009 to 163 in 2010.

Experts say that while there are a number of ways hackers can attack a mobile phone, the most popular is through downloadable applications. In the second week of March alone, Android Market, the application store for Android phones, was hit by around 60 malicious apps.

So what do you do with your smartphone if you want to stay safe? Experts advise people to ensure that all their applications are the latest versions, which may have fixes for security lapses in previous versions.

This may have to be done manually since smartphones don’t automatically update applications like normal computers do.

“Most malicious codes that we found in smartphones are designed to collect personal data like contact lists, text messages and other things,” said Lee Seong-geun, an analyst with Ahn Lab, Korea’s No. 1 computer security company. “We advise people to download antivirus software made for smartphones.”

And AhnLab is not alone. Companies are rushing to develop security infrastructure for smartphones. Ssomon, a Korean tech firm, recently released Mobile Device Management, an app that allows users to delete sensitive files and documents stored on smartphones from a remote location if the device is lost. SoftSecurity also released a similar app.

“The wireless and mobile business isn’t big yet, but we expect to see sharp growth in the near future,” said a KISA official.