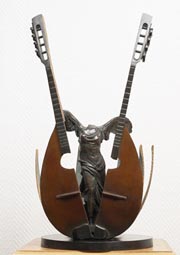 From April 12 to April 18: During the week, 193 sculptors from the America, Europe and Asia will exhibit their representative works, indicating the trajectory of contemporary sculptures.

The exhibition features more than a thousand works from 143 Korean artists as well as 50 overseas sculptors including Baek Nam-jun, Salvador Dali and Arman.

In the digital age, the works on display would render a chance to ruminate what human hands can achieve that computer chips cannot make.

The participating artists make use of all sorts of materials to bring out their works ? from rock, paper to mixed materials. In addition, the nationality of sculptors is extensive including not only Korea but China, France, Japan, Venezuela and so forth.

This year marks the first of ISF, which takes the form of sculpture art fair.


INTERVIEW & ARTISTS AS AN INTERVIEWER

To April 20: The Arko Art Center is holding an exhibition, showing how the act of “interview” is incorporated in the contemporary art.

Taking for granted that interviewing is the process of understanding two parties via dialogue, the exhibition casts doubt on whether the questions are the justified means in meeting the goal. For example, artist Chun Kyung-woo in his “100 Questions” has collected 50 questions each from Europe and Seoul which the audience or listeners can only answer in either yes or no. In this way, the artist insinuates that the questions already expect answers in some intended manner.

The artist as an interviewer sees the heyday with the advent of video art, which peaked in early 2000s in Korea. The works of representative Korean video artists such as Jung Yeon-doo and the artist group Flying city. 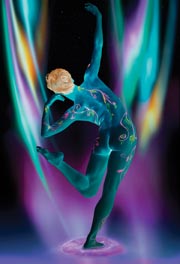 From Today to May 8: The gallery Sun contemporary is holding a solo exhibition of artist Koh Sang-woo.

New York-based artist Koh has drawn the attention of art industry through his comprehensive production method by mixing painting, objet and performance. Through the exhibition, the artist displays 15 pieces of his new works with releasing the film which shows his production period. In addition, Koh’s drawings would be disclosed for the first time.

Just like his title “Pretty Powerful” indicates, Koh’s works are fairly impressive but at the same time delivering seemingly transcendental aesthetics by means of woman’s body and flowers.

Whereas his previous works dealt with social issues such as custom, race and sex, the artist now covers more universal topics including freedom, dream and the individual’s struggle to achieve those universal goals. The colors, structures and textures has become more exquisite, according to industry experts.

The artist likes to hire not professional models but ordinary people having their own passion toward life. And this time, a Chinese-born ballerina who works in the United States was singled out as Koh’s model. 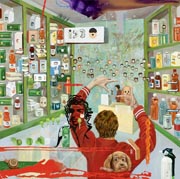 From April 12 to May 22: The Mongin Art Center presents a solo exhibition by artist Chung Sue-jin entitled “Pyramid Dialectic.”

Taking a glimpse of the title of exhibition arouses a headache with Hegelian philosophical jargon. Artist Chung has paid attention to the world in which we live, composed of substance that is visible and tangible. However, the artist attempts to further visualize the invisible human spirit on canvas through the combination of colors and forms.

The artworks here are the fruit of Chung’s endeavor to translate nothingness to visible something. The process can be seen as the logic of dialectic, as the tension between nothing and something being resolved by means of synthesis in artistic feat.