High-flying antics under the big top

High-flying antics under the big top 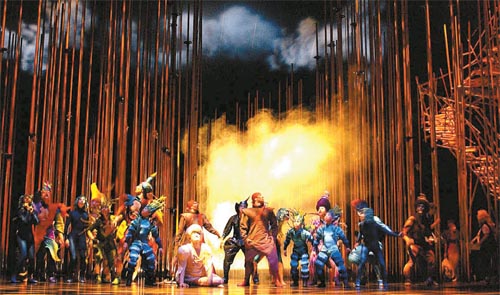 Icarus, center, survives his fall from the sky and lands in a magical forest filled with a cast of strange creatures in “Varekai,” the latest production by Cirque du Soleil to come to Korea, which runs until May 29 at the big top at the Jamsil Sports Complex. Provided by Mast Entertainment


Cirque du Soleil is back in Korea for a third time with “Varekai,” which opened yesterday at the blue-and-yellow big top set up at the Jamsil Sports Complex.

“Varekai,” the company’s fifth creation, premiered in Montreal in 2002 and has been seen by more than 6 million people in 60 cities worldwide over the past nine years.

The title “Varekai” means “Wherever” in Romani, a Gypsy language. The production “pays tribute to the nomadic soul, to the spirit and art of the circus tradition, and to the infinite passion of those whose quest takes them along the path that leads to Varekai,” according to its Web site.

The troupe was founded in 1984 with a staff of 73 that has grown to more than 4,000. Since its founding, close to 100 million people in over 250 cities around the world have seen a Cirque du Soleil show.

“Varekai” is based on the Greek myth of Icarus - with a twist. In the original, Icarus flies too close to the sun, melting his wings of feathers and wax, and falls to his death.

The Cirque du Soleil version has Icarus making a soft landing in a magical forest filled with odd, otherworldly creatures. One of these is a supple enchantress who helps him overcome his fears and serves as his guide to the strange new world.

Director Dominic Champagne, who does double-duty as the show’s writer, said the story came about after he wondered what would have happened if Icarus had actually survived the fall, according to a press release about the show.

To tell the tale, the world-renowned troupe employs spectacular costumes, intricate sets, a multilayered soundscape played live by a seven-piece band and two singers, and its usual high-flying mixture of circus tricks and acrobatic choreography. This includes a round of human juggling, aerial hoop acts, a solo dance on crutches and much more.

The show unfolds in four distinct spaces. The forest where Icarus falls is filled with more than 300 trees, some as high as 10.5 meters (34 feet) tall, which later become a playground for the performers’ daring acrobatic feats. Then the stage transforms to reveal an empty space within the forest. It changes again to form The Catwalk, a road to heaven, and goes through a final transformation into The Lookout, the pathway to the outside world.

Because they are in town for such an extended period, the circus troupe sets up camp in a series of tents that form a small village near the performance venue. The numerous tents serve as kitchens, offices, rehearsal studios and classrooms for young acrobats and the family members of older performers. The village, which takes two weeks to build, even generates its own electricity.

Look for that electric charge to carry over into the show when you go under the big top.

The company also offers a VIP package called Tapis Rouge, which means red carpet in French and originated from a ritual artists would go through before a performance to share ideas and reaffirm their friendship. The package, which includes VIP tickets to the show, access to the lounge one hour before the show and food and wine service, costs 220,000 won.