How the oldest player in baseball stays relevant

How the oldest player in baseball stays relevant 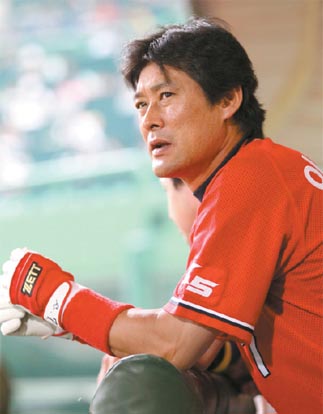 Lee Jong-beom watches from the dugout. The 41-year-old is the oldest player in the KBO. [JoongAng Ilbo]

The stigma attached to being the oldest person in professional baseball makes every day a battle for the Kia Tigers’ Lee Jong-beom. But the veteran says his days are far from numbered.

Now 41-years-old, Lee debuted in 1993 when his team was known as the Haitai Tigers. When he took home the MVP award in 1994, Lee lead the league in five categories - batting average, hits, stolen bases, runs and on base percentage. He won four Golden Glove awards before making the move in 1998 to the Chunichi Dragons, in Japan’s pro league.

Lee, however, faltered in Japan. Difficulty adapting to a positional change from shortstop to right field, disputes with his manager and an elbow injury marred his tenure there. After four years with little to show for it, Lee had no choice but to return to Korea in 2001.

Though his second spell in Korea has not been as fruitful as his first, mainly because of inconsistent play, Lee’s his experience has been something he’s been able to convert into success. He is also much more comfortable playing right field.

Lee stays sharp by being ready for anything.

“I always prepare. That’s all,” Lee said in an interview with Ilgan Sports.

If the first three games of this young season are an indicator, Lee is still looking to contribute to the team’s success. Lee has been an integral part of the first three games, driving in a crucial run in each. In the season opener against the Samsung Lions on Saturday, Lee hit a clutch RBI double in the bottom of seventh inning, extending the Tigers’ lead to 2-0. Then on Tuesday’s game against the Hanwha Eagles, Lee came in as a pinch hitter in the fourth inning and drove in a run to give the Tigers a 3-1 lead.

“I know people are skeptical of me, but I am always prepared,” Lee said. “Whether I am a starter or pinch hitter or not even playing, I will always be ready to play.”

Hits and RBI are not the only contributions Lee makes to the club. The veteran has embraced a role as mentor for his younger teammates.

“Lee’s advice to young players is not like the advice you hear from others,” Tigers manager Cho Bum-hyun told Ilgan Sports. “Lee leads by example, which is the best way to do it.”

Lee has always understood his role. He captained the Korean team to third place at the 2006 World Baseball Classic and has had two stints as Tigers captain.

“I try to dish out as much advice as I can to my young teammates,” Lee said. “These days, I emphasize preparedness because you can’t produce good results unless you are prepared. I also talk about how to cope with different game situations. This is another way for me to help.”

Lee’s offseason training regimen was so strenuous that his younger teammates had a hard time keeping up. And Lee worked to shorten his swing this season to adapt to young pitchers who throw faster. Now, his only goal is to win the Korean Series.

“I will first think about the upcoming game against Eagles, but after all, it’s all about winning the season.”