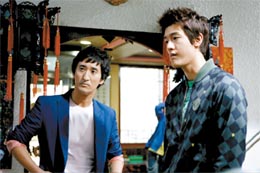 Detective Cho (Shin Hyun-jun) is incompetent and always fails to be promoted. His only pleasures in life are spying on neighbors who are having affairs or binge drinking. One day, Cho comes across the corpse of what seems to be a child on a nearby mountain and he decides to investigate the case, thinking that this is his last chance to impress his boss.

Cho enlists the help of his partner, Detective Lee, and together the two embark upon an investigation that will test their professional judgement. The more they learn about the case, the more they come to suspect that the poverty-stricken father of the dead child is their killer. But the case goes off course when the two begin to sympathize with him.

With the number of child murders increasing every year in Korea, the film tackles a timely subject with compelling performances by actors including Shin and Jeon No-min, who is currently starring as a butler at a local conglomerate at MBC drama series “The Royal Family.”

It is the first film directed by filmmaker Min Byung-jin and the first film produced by Shin, who has been active in film industry for the past two decades. Shin established a production company of his own last year and this crime drama is its first offering. 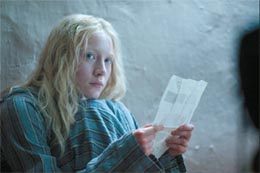 Hanna is no ordinary girl. The 16-year-old, played by Saoirse Ronan, was trained by her ex-CIA father, Erik, to be just like him - an assassin, soldier and spy with skills no other agent can match.

Hanna and Erik (Eric Bana) live life in hiding in the snowy landscape of northern Finland, and while Erik is more concerned about safety, Hanna wants to get out and utilize her skills.

Eventually the two split up with plans to meet again in Berlin later. This is what Hanna has been waiting for all her life.

But when she finds herself captured by a malicious CIA agent named Marissa Wiegler (Cate Blanchett), who thinks Hanna is just a normal, albeit quiet, girl, the film takes a turn that sets up the rest of the story.

Hanna surprises everyone by escaping and pretty much slaughtering everyone in her way. And the remainder of the film follows her journey - both action-packed and story-driven - from Morocco, where she was captured, to Germany, where she’s supposed to reunite with her father.

“Hanna,” according to most reviews, features eye-opening cinematography - with stark contrasts between the ice-cold shots of northern Scandinavia and the warm tones of Morocco - and an expressive performance by the young Ronan. Joe Wright (“Atonement,” 2007) directed the film. 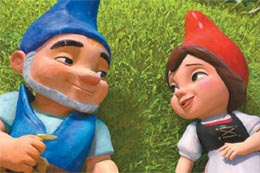 It’s a gnome version of Shakespeare’s story of star-crossed lovers. Expect multiple references to size, including the obligatory “Size doesn’t matter” reference. Excellent animation and a script that will likely be full of well written lines, with a few adult references thrown in, will probably make this worth watching.

For the most part the cast is full of big British names, including Michael Caine, Patrick Stewart, Maggie Smith and Julie Walters but the casting director decided to balance up the talent with the inclusion of not just Ozzy Osbourne but Hulk Hogan too. The Hogan gnome will more than likely just throw things around the Osbourne gnome will probably have a quad bike accident.

Oh, and there is a gnome version of Elton John and the film features all of his sings. Well he did produce it. 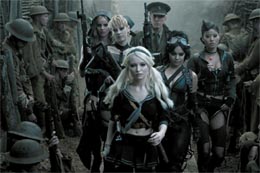 Baby Doll (Emily Browning ) is a beautiful young girl who is institutionalized by her wicked stepfather where she is due to be lobotomized. She enters into a fantasy world where she, and four equally beautiful inmates, battles all kinds of beasties to find. The special effects look fantastic and they more than likely make up for what is surely missing in narrative.

Directed by “Watchmen” (2009) and “300” (2006) director Zack Snyder, the fantasy adventure world mixes all genres of monsters and ghouls so expect fire-breathing dragons, robots, biplanes and machinegun-toting demonic samurai. One critic labelled it a “ludicrously overblown comic-book gothic fable” but the target audience will more than likely be delighted with both the flesh and the fury on show.

The tag line says “You will be unprepared.” Well now you won’t be.

Guillermo del Toro is out with another horror-thriller flick, this time producing “Julia’s Eyes” (“Los ojos de Julia” in Spanish).

Julia is a beautiful woman who is slowly going blind with the same eye disease that blinded her sister.

But after her sister is found dead in her basement, Julia begins trying to investigate her mysterious death, all the while her vision slowly ebbs.

With stunning cinematography, a haunting mood and its fair share of gore, “Julia’s Eyes” recreates much of the magic behind “The Orphanage” (2007), which was created by many of the same people behind this latest del Toro film to hit Korean movie theaters.