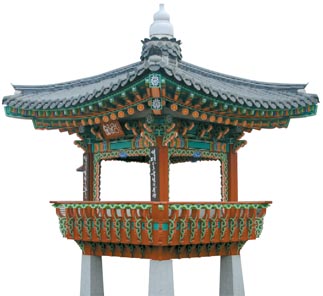 A traditional Korean pavilion paid for by the city of Suncheon, South Jeolla, for the 2011 International Horticultural Expo. By Christine Kim

XIAN - The first thing to greet visitors in Xian, China, is a mouthful of dust-filled air. Clear, blue skies are a rarity in this city, which receives an average of just 600 millimeters (23.6 inches) of precipitation a year. First-timers to the area are generally advised to drink a lot of bottled water and eat fruit by the bushel to keep hydrated.

The yellow sand that burns your eyes and clogs your nose comes from the Gobi Desert.

In the middle of this parched land is the site of the International Horticultural Expo, which will open to visitors in less than a month.

For 178 days starting April 28, visitors will stream into this city for the expo, which was planned to succeed the 2010 Shanghai Expo in China. Whether the horticulture expo receives the same acclaim is yet to be seen.

Large potholes were waiting to be filled on sidewalks inside the grounds on a recent trip to the area. Surprisingly, organizers have yet to select the flowers and plants that will be on display here, according to Chinese guide Xinyu Yang.

Yang explained that the flowers on the site will be replaced up to five times over the course of the expo, “to show the changing of the seasons.”

Time is ticking and organizers have much to do to fill the 418 hectare (1.6 square mile) grounds. They are working around the clock. On the tour, workers could be seen crouched over dirt patches, planting flowers by hand.

Some flowers already planted had long wilted and were waiting to be replaced.

The plot for the South Korean exhibition remains unfinished. Soon though, a pond afloat with lilies will rest here.

A traditional Korean pavilion has been completed at one corner of where the pond will be built, with “Suncheonjeong” written on the sign.

South Korea’s exhibition has been funded by the city of Suncheon, South Jeolla, as it and Xian signed an agreement to cooperate on their respective expos. Suncheon will host its own expo in 2013. The Suncheon exhibition will be 910 square meters, according to Oh Haeng-seok, a Suncheon official in charge of expo affairs.

“I think it will be better understood as a royal pond,” said Oh, who added that the pavilion, which was built with wood imported from Korea, will be given to the city of Xian as a gift once the expo is over.

The Xian expo will also feature a large North Korean section, which Oh said was paid for and built by the Chinese government.

Although the horticulture may not yet be there, the organizing committee said that the expo, which has a budget of 2 billion renminbi ($305 million), is ready to go.

“Xian is ready, the expo is ready,” said Wang Ying, a Chinese official for the expo.