XIAN, Shaanxi Province - In the spring of 1974, five farmers digging a well in eastern Xian, Shaanxi Province, made one of the most important archeological discoveries of the 20th century. Instead of finding a source of water, they unearthed something that would forever change their lives, revealing a gold mine of ancient artifacts that allowed scholars to rewrite the history of the first emperor of unified China.

China had long forgotten about the army of terra-cotta warriors, which were originally built on the orders of Emperor Qin Shi Huang (259 BC?210 BC). Historians estimate the army survived buried beneath the ground from about 209 BC.

When he was just 13-years-old, Qin Shi Huang ordered the construction of his mausoleum and thousands of stone warriors to guard it after his death. It is estimated that the emperor ordered 64 workers to create the warriors’ faces, none of which are exactly the same.

According to regional experts, signatures of the artists could be found on the warriors, which are 170 to 200 centimeters (5 feet 7 inches to 6 feet 7 inches) in height. The warriors had originally been finished with color lacquer, but the Chinese workers at the mausoleum explained that the varnish had long disintegrated.

The mausoleum’s main tomb containing the emperor has yet to be opened. 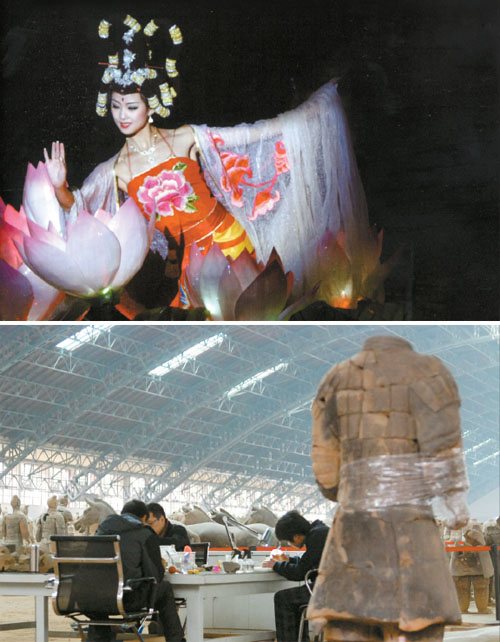 Top: A performer dances during a performance of “The Song of Everlasting Sorrow.” Provided by the performance organizer / Above: Workers piece together fragments of terra-cotta warriors. By Christine Kim


Roughly 8,000 stone warriors were buried in the mausoleum, along with hundreds of terra-cotta horses and over 100 chariots. The warriors’ appearance and attire vary by rank. They can be largely divided into classes: generals, middle-ranking officers, lower-ranking officers, ordinary soldiers and resistant warriors. There have only been seven generals found in the pit.

Only part of the mausoleum is open to the public, where row upon row of the terra-cotta soldiers stand at attention. There are three large pits. The largest, pit No. 1, has the most warriors and draws the highest number of sightseers.

When walking around the mausoleum, visitors are frequently stopped by local men with bulging backpacks that hawk little gift boxes with miniature soldiers. The pricing depends on the buyer’s ability to haggle, which is expected at nearly all vendors here.

One of the original five farmers sometimes makes an appearance at the official gift shop. Locals say the government had to teach the man how to write his name so he could sign autographs.

The terra-cotta army is undoubtedly the most important tourist site in the vicinity of Xian, but there are other intriguing stops here.

The Huaqing Hot Springs - once the site of a famous love affair between Emperor Xuanzong (685-762) and his concubine Yang Guifei in the Tang Dynasty (618-907) - attract many visitors. It is situated on the northern foot of Mount Lishan in Lintong County, 30 kilometers from Xian.

Visitors today can see where royals once bathed. The sprawling Huaqing Palace was built around the hot springs by King You during the Western Zhou Dynasty (11th century BC) and has been subsequently expanded on a number of times, most notably by Emperor Xuanzong (685-762) of the Tang dynasty. 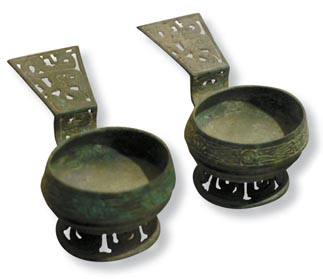 Ladles from the Western Zhou Dynasty (11th century BC) are on display at Shaanxi History Museum. By Christine Kim

The biggest attraction is a musical dance performance that takes place at the hot springs named “The Song of Everlasting Sorrow,” after a poem written about the emperor and his consort by Chinese poet Bai Yuzi.

The performance tells of the romance between Emperor Xuanzong and his concubine.

Although the emperor is said to have had tens of thousands of beautiful women live inside his palaces, Yang Yuhuan was his favorite during the later years of his reign. After he made Yang his consort, she was given permission to use Huaqing Pool at the hot springs, which had until then been reserved for royal use only. A small pagoda still exists where Yang used to dry her hair, tour guides say. Some locals claimed that Yang’s habit of taking frequent baths was to mask her body odor.

As the emperor carried on with Yang, he was put in a tough spot when her brother was accused of plotting a revolution. It was then demanded of Emperor Xuanzong that he put his lover to death. He first refused, then relented.

The emperor ordered that she be strangled to death, but locals say she committed suicide before palace authorities could get their hands on her.

The Song of Everlasting Sorrow is conducted in nine parts, during which elaborate costumes and dance can be seen on a stage that at times is submerged underwater for dramatic effect.

Adding to the spectacle, the entire face of Mount Lishan is lit up during the performance with LED lights to mimic stars, and a giant artificial moon glows in the distance - the appearance of which draws “oos” and “ahs” from the audience.

The performance season begins in April.

If visitors fail to make it to the hot springs or The Song of Everlasting Sorrow is canceled due to rain, the Shaanxi History Museum is worth a visit.