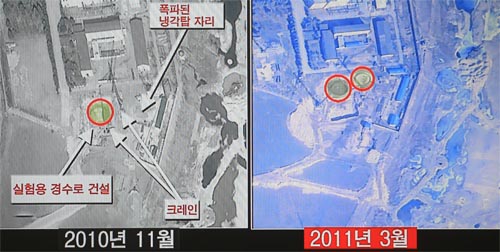 Before and after satellite pictures of Yongbyon. The left picture was taken in November 2010 and the right one last month. Broadcaster KBS said the pictures showed progress in the building of a new light water reactor. [YONHAP]


A senior Korean official yesterday played down the level of progress made in the construction of a suspected light-water reactor at North Korea’s main nuclear complex after a satellite image suggested the communist state might be building another reactor.

“It doesn’t seem that another light-water reactor is being built,” the government official said in a meeting with reporters, asking not to be named.

The satellite image, taken March 24 and disclosed by local state broadcaster KBS on Thursday night, showed a fresh construction site near what appeared to be a 40-meter-tall structure that the North claims is a light-water nuclear reactor.

The structure was only about a meter high when the North unveiled it to Stanford Professor Siegfried Hecker last November. In addition, North Korea showed the visiting expert a modern uranium enrichment facility operating at high gear.

Pyongyang claims it plans to produce energy for peaceful use through its enrichment of uranium, which can be used as fuel in light-water nuclear reactors. South Korea and the United States accuse the North of seeking a second track to develop nuclear arms in addition to its plutonium-based program.

Commenting on the satellite image of the Yongbyon nuclear complex, the South Korean official said progress made in the construction of the suspected reactor is not significant enough to warrant alarm, calling it “not really a big deal.”

“In terms of quality, there doesn’t seem to be much progress,” the official said, adding that the nearby site where a separate construction project appears underway could be used to accommodate an auxiliary facility such as a steam generator.

“But there do appear to be two turbine generators (in total) used to power the light-water reactor,” the official said.

His comments come as senior U.S. and North Korean diplomats are in Beijing in what the U.S. State Department described as a coincidence, despite looming speculation that the sides may be trying to lay the groundwork for resumption of the six-party nuclear talks.

The have been stalled since late 2008. North Korea said last month that it was willing to discuss its uranium enrichment activity.