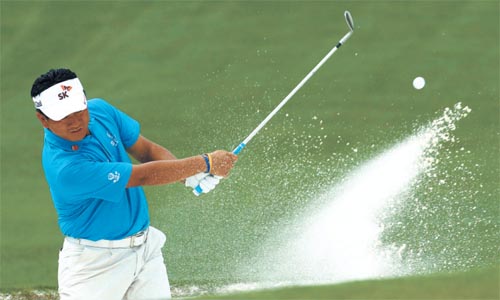 Korea’s Choi Kyung-ju hits from a sand trap on the second hole during third-round play in the 2011 Masters golf tournament at the Augusta National Golf Club in Augusta, Ga., Saturday. Choi finished the round tied for second at 8-under. [REUTERS/YONHAP]


AUGUSTA, Ga. - Golfers from beyond U.S. borders are on the verge of owning all four major titles for only the second time in golf history by capturing their third Masters green jacket in four years.

And for the first time in Masters history, no American is in the top five entering the final round at the fabled Augusta National Golf Club.

Northern Ireland’s Rory McIlroy fired a 2-under par 70 to stand on 12-under par 204 after 54 holes at Augusta National, which did not surrender a title to a non-U.S. golfer until Gary Player in 1961 at the 25th Masters.

Australian Adam Scott and England’s Luke Donald were another stroke back with American Bo Van Pelt in eighth place. Tiger Woods is one shot behind Van Pelt, tied for ninth with Fred Couples.

Evoking memories of the 1990s, the Masters leaders are perhaps heralding an even greater global run than they did in 1994, when Spain’s Jose Maria Olazabal won the Masters, South African Ernie Els won the U.S. Open and Zimbabwe’s Nick Price won the British Open and PGA Championship.

That has been the only time in major golf history that all the major titles were outside American hands.

But it could happen again Sunday after 2010 triumphs by Northern Ireland’s Graeme McDowell at the U.S. Open, South African Louis Oosthuizen at the British Open and Germany’s Martin Kaymer at the PGA Championship.

“Players are really watching how the other top players are playing,” Choi said. “They are studying them and the more chances they have to play abroad, that definitely gives them the experience.”

Add to that the leaps in technology and Choi, who is looking to become the first Asian to win the Masters, says they are the key reasons why global rivals are on the verge of once again taking keeping all four major titles out of American hands.

“The depth of the players have really gone deep now,” Choi said. “I try to practice a lot. I study other players. I do my homework. So I think that’s what’s contributing to the development of international players.”