Of ceramics and shipwrecks

Of ceramics and shipwrecks 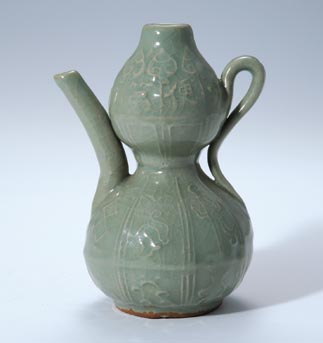 This teapot is one of 20 pieces that will be shown to the public for the first time in one of two new exhibitions at the National Museum of Korea. Provided by the museum

Two new exhibitions at the National Museum of Korea provide fresh insight into Korean celadon, the pale green ceramics widely known for their beauty and artistry.

The exhibitions showcase ceramics from Yucheon Village in Buan County, North Jeolla, and Sinan, South Jeolla, in an attempt to broaden the public’s understanding of this delicate art.

“The Song of Nature: Goryeo Celadon of Yucheon-ri Kiln Site” is the first public showing of the results of the 1966 excavation of Yucheon Village kiln site No. 12.

“Tea, Incense, and Carrying the Soul: Longquan Ware from the Sinan Wreck” shows a collection of ceramics that were carried in the wrecked Chinese vessel in the waters near Sinan.

The refined Korean celadon known worldwide today is known in Korea as Goryeo (918-1392) celadon, which was created in the kilns of Yucheon-ri, North Jeolla, and Gangjin, South Jeolla. These artists developed Sanggam, which are inlaid designs that eventually came to distinguish Korean celadon from its Chinese and Japanese counterparts. 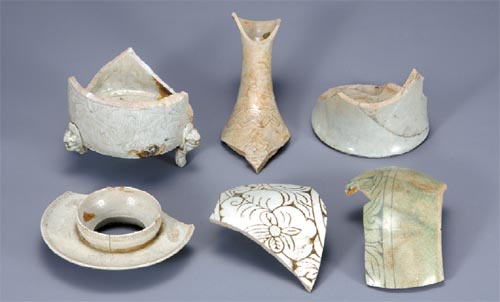 Another exhibition shows celadon from Yucheon-ri, North Jeolla, where the most refined Goryeo ceramics were made.


The exhibition consists of 111 ceramic pieces, and shows the kilns’ history and development.

The first section, “Goryeo’s Royal Kiln, Gangjin and Buan,” compares celadon from Yucheon Village and Gangjin, where the most refined celadon of Goryeo was found, to celadon from other regions such as Gongju, South Chungcheong, to give visitors a better idea of the similarities and differences between the two.

The second section, “Craftsmanship bestowed from Heaven,” showcases a variety of ceramics, including one interesting piece that was a incense holder that doubled as a spittoon.

The third section, “Yucheon-ri Ceramics and the People of Goryeo,” showcases ceramics excavated from the tombs of Goryeo people, including King Myeongjong, who ruled from 1170 to 1197. This part of the exhibition also shows a bowl that was found in the tomb of aristocrat Mungongyu, who died in 1159. The bowl is the oldest extant example of Sanggam inlay and is designated National Treasure No. 115.

The second exhibition, “Tea, Incense, and Carrying the Soul: Longquan Ware from the Sinan Wreck” shows approximately 90 pieces from the Chinese merchant ship, including 20 that will be shown to the public for the first time.

The ship was carrying ceramics to Japan when it sank off of the coast of Sinan in 1323. The ship was discovered by a local fisherman when he pulled it up in his fishing net in 1975. When the site was excavated from 1976 to 1984, over 30,000 artifacts were found and brought to the surface, including 20,000 ceramic pieces, of which more than 14,000 were made in Longquan, China.

Longquan ware was the original term for celadon, named after a character in a French opera who wore a costume of pale blue-green that was later compared to the color of Longquan ware.

The exhibition focuses on pieces that show tea culture and related accessories including teapots, cups, plates, bowls and teaspoons. There are also larger pieces that powerful figures of the time used to transport food.

The exhibition also gives an introduction to the colors, patterns and pottery techniques used to make Longquan ware as well as describes the historical and artistic significance of the ceramic ware.

*“The Song of Nature: Goryeo Celadon of Yucheon-ri Kiln Site” exhibition runs through May 29 in the Celadon Room in the Sculpture and Crafts Gallery.

“Tea, Incense, and Carrying the Soul: Longquan Ware from the Sinan Wreck” exhibition runs through June 19 in the Sinan Shipwreck Collection Room in the Asia Gallery.

Admission to the exhibitions is free. Go to Ichon Station, line No. 4, exit 2. Exit 2 is temporarily under construction until April 30, so if visiting in April, use exit 1 or 3 instead.