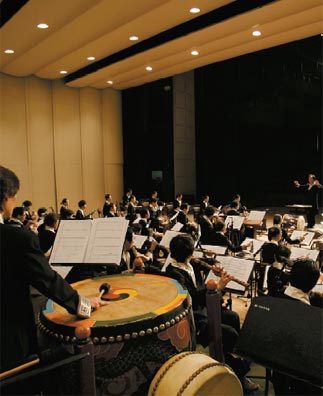 To give audiences a broad yet fun introduction to Korean music, the Korean Traditional Performing Arts Foundation has organized a whimsical concert with an unconventional format.

The concert is called “Lecture Concert - Manual to Korean Traditional Music” and will take place Wednesday at the National Gugak Center in Seocho-dong, southern Seoul.

As its name indicates, the concert is structured like an instruction manual and each of the sections is named for a chapter in the manual.

The “lecture” is led by a comic character named Professor Whimsical and contains various songs that illustrate the history and traditions of Korean music.

To help the audience understand the background of the songs, paintings by Korean artists will be displayed on a screen behind the performers.

“The purpose of this concert is to show the different faces of spring through the beauty of Korean music,” said Kim Sung-min, assistant manager of the Korean Traditional Performing Arts Foundation.

The first section, “Music to Suit Your Mood,” introduces audiences to music for loneliness or happiness.

The first song in this section is “Moonlight,” a sonata for haeguem (a two-stringed instrument) by Jung Dae-seok.

Featured alongside the song is “Wolhatangeumdo,” a Lee Gyeong-yun (1545-1611) painting that depicts Joseon era scholars who play and sing music to alleviate their loneliness.

During this section, professional voice actor Park Hyung-ok will read an essay written by Prof. Song Hye-jin of Sookmyung Women’s University that was inspired by Lee’s painting.

The next song in the section is a lively modern gugak (traditional Korean music) song called “Travel,” by Lee Jun-ho.

This is followed by a section called “Music Warranty,” which introduces new gugak songs that can be enjoyed by anyone unfamiliar with gugak, Kim said.

The featured songs are “Frontier,” which was composed by renowned pianist and composer Yang Bang Ean, and “Pannoleum,” by composer Lee Jun-ho.

The two songs show the traditional and modern elements in Korean music, according to Kim.

The final section is “Damage Compensation,” and is designed to gather feedback from the audience.

Audience members will be given surveys asking about their experience at the concert and will be asked to turn them in.

Some of the surveys will be read on stage and anyone who is unsatisfied with the quality of the concert will be given a gift.

The organizers acknowledge they are taking a risk with the unconventional concert format but say they hope it will get audiences more involved in the concert experience.

“This is going to be different from any other gugak concert, so we are also excited and nervous to get feedback from the audience,” said Kim.

*“Lecture Concert - Manual to Korean Traditional Music” will be presented on Wednesday at the National Gugak Center.

The concert is in Korean and starts at 7:30 p.m. Admission is free but reservations are required. To make a reservation, go to www.ngugak.or.kr.