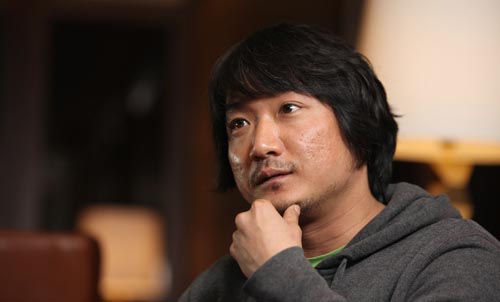 Park Jung-bum made his directorial debut with “The Journals of Musan,” which has received acclaim the world over. He was even dubbed “a monster” by one high-profile film critic because of his early success. [JoongAng Ilbo]


Director Park Jung-bum had no idea that his first feature film would be received with such acclaim when he was scouting locations and holding auditions for the low-budget film “The Journals of Musan.”

“I didn’t even think it would be released,” he admitted.

The movie was born from tragedy. Inspired by his friend, Jeon Seung-chul, who defected from North Korea in 2002 and died of stomach cancer six years later at the age of 30, Park wrote a screenplay and made a 20-minute short film in 2008.

Entitled “125 Jeon Seung-chul,” the short film portrayed the struggles of a young North Korean defector to fit into South Korean society. The numbers 1, 2 and 5 are the first three digits of North Korean defectors’ citizen identification numbers in South Korea. It’s supposed to be a way to give them easy access to special state welfare programs, but instead often ends up stigmatizing them.

Although it was a only short film, it was compelling enough to catch the attention of film critics in Korea. It earned Park the special jury award at the 2008 Mise-en-scene Short Film Festival in Seoul.

Veteran director Lee Chang-dong, now famous for his award-winning film “Poetry” (2010), soon encouraged Park to develop “125 Jeon Seung-chul” into a full-length film to highlight the grim reality of North Korean defectors in the South. The result would be “The Journals of Musan,” a name that Lee came up with.

Park, however, confided that he felt guilty, worried that he was using the plight of North Korean defectors for his own gain. 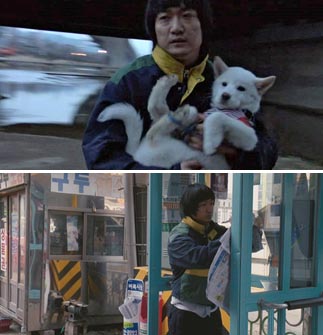 Stills from “The Journals of Musan,” which will open in theaters nationwide on Thursday. North Koran defector Jeon Seung-chul is a good-hearted man with a can-do attitude. But his life does not improve because of the first three digits of his citizen identification number, 1-2-5, which are supposed to be a way of giving North Korean defectors easy access to special state welfare programs, but instead often stigmatize them as outsiders in South Korean society. Provided by JinJin Pictures

But a message from his deceased friend gave him the courage to go ahead with the film. After Jeon’s death, Park came across an unread message sent to him through the social networking Web site Cyworld. The note read, “It’s a pity for me to leave without watching your first feature film.”

Park, who was working as an assistant director on Lee’s “Poetry,” took a four-month leave with Lee’s help to film “The Journals of Musan.”

The film had a budget of only 80 million won ($73,840), and while Park had to contend with regular interruptions during the filming, it is hard to find traces of the movie’s financial and production difficulties.

Park is expected to win even more hardware. “The Journals of Musan” has been invited to six more film festivals this year - in Spain, Poland, Denmark, Belgium and the United States.

Responding to Park’s highly praised cinematic techniques and his natural ability to tell a story, film critic Kim Young-jin dubbed Park a filmmaking “monster.” The humble director also played the role of Seung-chul, the lead character in the film.

Before the nationwide release of “The Journals of Musan” on Thursday, the Korea JoongAng Daily talked to Park at a press screening and over the telephone about what makes him a so-called “monster” in the movie industry at such a young age.


Q. How do you feel about the rave reviews from all of these international film festivals?

A. My heart flutters whenever I’m invited to a film festival. Most recently, I’ve been to two European countries, and I was surprised to see there were just as many old moviegoers there as there are in Korea. Another thing that surprised me was the many laborers in European countries that talked to me, saying they could relate to the lives of North Korean defectors.

Tell us more about your friend Jeon Seung-chul.

Back in college, both of us majored in physical education (at Yonsei University). Seung-chul and I were enrolled in the same classes.

His brother defected to the South first, and Seung-chul and his mother arrived here later. He used to play hockey up in the North, but his heart was in movies, so he joined my film projects as a staff member. We lived together for about four months. After he came down with stomach cancer, he received chemotherapy over a period of about two years before he passed away.

From the many interviews you’ve had with local media, you’ve often cited a feeling of guilt from making a film about North Korean defectors and their tough lives. Do you still feel the same way? For those who don’t know much about the lives of North Korean defectors, your film has been a reality check.

I’m free from guilt because I know I’m not using them only as a subject matter, because this is our (South Korea’s) reality and we should all have a better understanding about it.

Why did you act in the lead role by yourself? You will also do the same in your next film. Do you have a passion for acting, or do you think it’s hard to find good talent?

For both movies I had my own reasons. For “The Journals of Musan,” it was the fact that no one knew Seung-chul better than I. It would have been hard for me to transfer my knowledge of Seung-chul to someone else. In addition to that, there are many scenes where Seung-chul is beaten and bullied. I knew these scenes would make or break the film; the most important thing was his eyes and his breath after he was beaten. I needed an actor who could take a beating, but I couldn’t ask an actor to submit himself to that. (Park was physically beaten in the shooting of the film.)

My next film will be the last where I act in the lead role.

What parts of the movie are based on fact?

Most of movie is based on fact, which I saw or heard from Seung-chul. For example, North Korean defectors often cheat their compatriots. They tend to fall in love at their churches in the beginning of their new lives here. And whenever they get together, they often talk about their daily wages. I just added dramatic elements.

It’s been reported that many North Koreans watch South Korean films and dramas in secret these days. Have you ever considered that your film might be available in the North?

I thought about it once. If it happens, my film would be good propaganda, letting them realize that life in the South is not rosy by any means.

When I was researching, I met many North Korean defectors, and most didn’t like the idea that I would make their stories into a film. One defector told me that my film would discourage many North Koreans who are endeavoring to make it to South Korea.

Seung-chul is a complex character, but you had to work both as an actor and director during production. What was it like?

During production, a string of misfortunes occurred one after another. A friend of mine committed suicide and the main cameraman was replaced. During production, I always felt sorry for my actors and crew for not paying them properly, which was due to my low budget. I had no time to care about my own personal difficulties.

Your father played the role of a detective who supported North Korean defectors. I thought he was a professional actor. Does your family have a background in the arts?

No. Until I was hooked on films, I dreamed of becoming a physical education teacher. My father and my younger brother majored in physical education. I cast my father for the detective role because the way he speaks and acts is pretty similar to a detective I know. I just told him what I wanted for each scene and he was a natural in front of the camera. In one scene in particular, he actually drank jugs of beer.

He is proud that he is part of my movie.

Your next film is a story about a young man from Gangwon and how he survives in Seoul. Are you drawn to the struggle of minorities?

I just finished writing the screenplay for my next project, and shooting will begin this winter. I don’t think I’m particularly interested in minorities, but I’m interested in people who are exposed to difficult situations, or the absurdity of society - people who are deprived of equal rights.