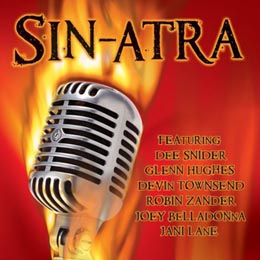 Just what makes those heavy metal rockers think they can sing like ’ol Frank Sinatra? But they’ve got high hopes, some of which are even justified on “Sin-atra,” a most unexpected heavy metal tribute album to Frank Sinatra. This is where the Chairman of the Board meets the power chord.

The best here, by far, is Twisted Sister frontman Dee Snider’s version of “It Was A Very Good Year,” a preening, insistent remake that lets Snider stretch his voice into the higher ranges while remaining true to the spirit of the original.

Most of the songs on “Sin-atra” fall into two categories: those that embrace the melody that was Sinatra’s hallmark and those that bash melody in the head, stomp on its broken body and then floss with it. Falling firmly into the latter category is “New York, New York” by Strapping Young Lad’s Devin Townsend. This track is so aggressively, over-the-top awful that it sounds like a bad Jack Black parody.