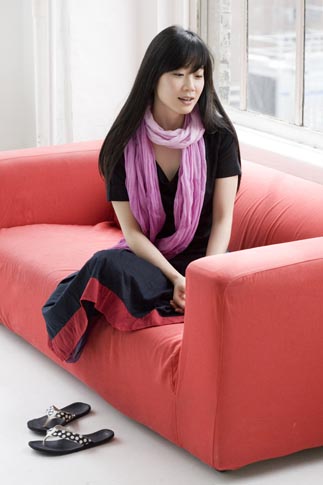 Former K-pop singer Yeahwon has found success as a jazz vocalist and she released her first self-titled jazz album in September. Provided by Sony Music

In Korea, where jazz is still considered by many to be highbrow and inaccessible, it’s been hard for jazz musicians to win fans. For some artists, the lack of a solid fan base also precludes entry into the international market.

But jazz vocalist Yeahwon’s debut in the international arena late last year signaled the emergence of a new generation of jazz vocalists from Korea. Her debut is even more significant because she sings Brazilian jazz, a genre not often explored by local vocalists.

On her first self-titled jazz album, released in September on the prestigious New York-based ArtistShare label, the 30-year-old artist reinterprets Brazilian numbers such as “Chovendo Na Roseira” by Antonio Carlos Jobim, “Travessia” by Milton Nascimento and “Memoria e Fado” by Egberto Gismontiy - and sings all the songs in Portuguese.

Originally a K-pop singer, Yeahwon released an album in 2002 called “Lovely” (released under her full name Shin Yeahwon) that showed off her crystal-clear yet emotional voice. She went on to study at the New School for Jazz and Contemporary Music in 2004 and graduated with honors two years later.

The Korea JoongAng Daily recently talked over e-mail with Yeahwon, who lives in New York with her husband, jazz guitarist Chung Sun. The following are excerpts from the interview.


Q. The song “Sae Ya Sae Ya” (“Birds Birds”), is the only Korean song on the album. Why did you choose to include this traditional folk song?

A. The song has always been my favorite. And since I am living overseas and doing foreign music, I tend to be increasingly attracted to Korean music nowadays. Musically, it seemed to go well with the other tracks, which are mostly Brazilian.

One Korean critic said your album is not for the general public. How would you respond to that?

Whether I am composing, arranging or performing, I only think about the music. For that reason, it feels good if listeners like it. But even if there are people who don’t, it’s OK because that’s their own taste. People don’t have to like all the music in the world.

I guess the critic wanted to alert people who were expecting me to sing K-pop that this album sounds different and may contain some unfamiliar chords and rhythms.

Can you describe a recent gig?

I had a gig at the Philadelphia Museum of Art (the famous steps of the museum are featured in the 1976 film “Rocky”) on March 18.

I was so excited because it was my first live gig with percussionist Cyro Baptista, who is one of the musicians on my album. Kevin Hays and Doug Weiss played piano and bass. The trio of piano, bass and percussion is my favorite combination, given that I’m a big fan of acoustic music.

I was especially impressed with the professionalism of Baptista, who brought all the necessary instruments to a rehearsal at my house and even rearranged one of his songs so that I could perform with him.

Many people around me have said that Baptista and I make a good team and I look forward to performing more with him in the future.

You were previously a K-pop singer and released an album entitled “Lovely” in 2002. What motivated you to leave for New York to study jazz in 2004?

My determination to study abroad was the first step in my journey to search for the music that I was constantly hearing from deep in my heart. I chose New York because it is where a variety of creative artists gather. I am still learning and feeling so much.

Was it your childhood dream to become a singer?

I dreamed of becoming a pianist when I was young. Then I became more confident about myself after getting into middle school and began to feel that music was my calling, even if it wasn’t related to the piano. Since then I have not only sung but also studied the violin, guitar, drum, haegeum (traditional string instrument resembling a fiddle) and janggu (hourglass-shaped traditional drum). I even love dancing and believe dance is a part of music.

Who has influenced you as a musician?

Among the classical musicians, my favorite has always been Chopin. But because I loved Chopin so much, my piano teacher encouraged me to stop playing his music and explore the music of Beethoven and other artists. Although my parents are not professional musicians, I grew up in a highly musical environment. We sang and performed together all the time.

How has being Korean affected your pursuit of Brazilian music?

My roots affect me no matter what I do - when I talk, cook, even sit cross-legged on the floor. That’s all because I grew up in Korea. And that’s probably why I am more and more attracted to traditional Korean music. I plan to pick up some related materials the next time I visit Korea.

Your father-in-law is Seoul Philharmonic Orchestra maestro Chung Myung-whun and your husband is guitarist Chung Sun. How has your relationship with each influenced your music?

My father-in-law is one of the musicians that I respect the most and my husband is the reason I do music. My father-in-law has a soul of immeasurable depth. He always puts others before himself and possesses the priceless gift of foresight. But at home he turns into an ordinary father, friend, cook and at times porter. Full of passionate love, he is one truthful human being, which I think is reflected in his music.

My husband is the family’s second son. He inherited his father’s musical talent, foresight and good heart, and his mother’s sense of beauty and wisdom. Despite being relatively young as a music producer, he has such a precise listening ability that musicians here are surprised.

He is the one who thought I would be well-suited to Brazilian music and directed me toward the genre. He also encouraged me to learn Portuguese and found a language teacher for me. I would not be what I am now without his help and support.

What is your performance schedule like? Do you have any performances scheduled in Korea in the near future?

I am set to perform in Brooklyn at a fund-raising concert for Japanese earthquake victims in April and at Latin music clubs in New York, such as Zinc Bar and S.O.B.’s in May. I am not exactly sure about my schedule after that because concerts keep popping up in the United States but I might be able to perform in Korea around September.