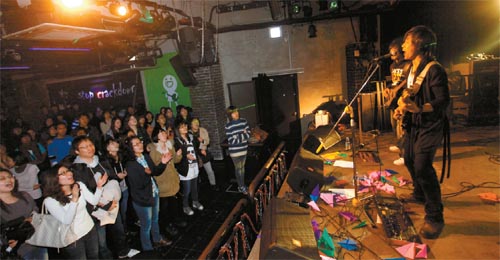 Soe Thi Ha, left, and Soe Moe Thu sing at a fund-raising concert for a Burmese migrant worker, Aung Naing Win, who had surgery for cancer of the tongue. The concert was held by Migrant Workers Television, an independent broadcaster run by migrant workers in Korea. By Oh Sang-min


The band Stop Crackdown, consisting of two Burmese and a Korean drummer, shouted the Burmese phrase “Yelele” at a fund-raising concert held by Migrant Workers Television on March 27 to help a Burmese migrant worker who has lived in Korea for 12 years. Aung Naing Win recently went through a 20-hour surgery to remove cancer from his tongue on Feb. 10 and needs more than 20 million won ($18,441) to pay medical costs.

Stop Crackdown’s vocalist and guitar player, U Soe Moe Thu, 36, is a staffer at Migrant Workers TV, a broadcasting company for migrant workers in Korea.

MWTV’s office in central Seoul might be one of the smallest broadcasting stations in Korea. The office is crowded when more than three people enter but the diversity and energy in the office remains high.

But the concert was just one in many events MWTV has. The station plans to hold fund-raising concerts for children of migrant workers, refugees, migrant women and other minority groups in Korea.

Aung Tin Tunh, the current executive of MWTV and the director of the Migrant Worker Film Festival (MWFF) has lived in Korea since 1993, and said MWTV aims to broadcast the opinions of migrant workers to the general audience.

“We want to communicate with Korean society,” Aung Tin Tunh said. “That is why we are broadcasting, holding film festivals and running media-education classes.”

Established in December 2004, MWTV started its “Migrant Workers World” program via cable channel RTV, in 2005. MWTV broadcasts news in 11 languages, including Burmese, Nepali, Korean and English, conveying important information about migrant issues that can be helpful for viewers.

There are currently three employees at MWTV, including Aung Tin Tunh and Soe Moe Thu. Volunteers also help out. The MWFF has been held every year since 2006. Last year, it took place in October and about 900 people participated.

“When we were preparing for the Migrant Worker Film Festival last year, I was the only regular worker,” Aung Tin Tunh said. “Though volunteers helped me during the day, I had to stay up late three to four days a week to direct the film festival.”

Though the films shown at MWFF are not like the high-quality movies produced by prominent Korean filmmakers, MWTV says the movies are meaningful because they reflect migrant workers’ attitudes.

The festival also shows the migrants’ diligence because they produce the films in their off time.

“Since there was no studio last year, we had to record in a room where we could hear noise from the playground outside. However, we have a studio this year after presenting what we do in an competition held by the Beautiful Foundation last year.” Soe Moe Thu said.

To encourage more participation from migrant workers, MWTV conducted two months of media workshops in March 2008. Since then, there have been four workshops, with 50 people completing them.

Though most of them can’t work at MWTV as video journalists since they have day jobs, a few of them shoot videos for special events. But making them attend every Sunday was not easy because that is their rest day.

“We called them every Friday evening, Saturday evening and Sunday morning. We treated them more carefully than we do anyone else,” Aung Tin Tunh said.

In the near future, MWTV plans to add more languages on their Web site and to broadcast news for migrant workers from their home countries in their languages. Also, it plans to establish a formal journalism course for people wanting to learn how to become writers, photographers or make videos.

“Working as a reporter for MWTV has enriched my high school years,” said Kim Ha-eun, 20, who has been a reporter for MWTV for two years. “It broadened my perspective of the world. I have learned about situations faced by minorities in Korea and their human rights.”

Said Soe Moe Thu: “We might not enjoy the fruits of our labor during our time contributing toward making a Korea in which everyone is respected, regardless of their ethnicity.”

“But if we keep trying with hope, like planting trees, the next generation will surely benefit from our efforts in the end.”

*This article was written with help of staff reporter Kim Hee-jin.