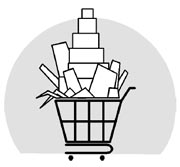 In the 17th century in the Netherlands, people began stockpiling tulips. The flowers, which first appeared in the country as imports from Turkey in the mid-16th century, were considered a symbol of wealth at the time. As demand for the expensive flowers grew, rare species brought high profits.

At that time, the price of just one rare Semper Augustus bulb was once equivalent to more than 10 times the annual salary of a carpenter. One unlucky sailor who accidentally ate a bulb, mistaking it for an onion, even had to serve several months in jail.

The madness of tulip hoarding ended suddenly. Tulip speculators tried to sell the flowers at once, and naturally the prices plummeted. This is the story of Tulip mania, often referenced whenever a speculative bubble appears.

Similarly, panic buying takes place whenever a shortage of goods is expected due to a sudden event such as a natural disaster.

Remember Y2K? Many predicted that computers would fail to recognize the date when the world entered the 21st century, causing all digital machines to malfunction. When the rumors of the problem spread, people rushed to buy emergency foodstuffs, gasoline, water and even flashlights.

Panic buying often ends up being a comical tragedy. British journalist Charles Mackay wrote in his book, “Extraordinary Popular Delusions and the Madness of Crowds,” that people make judgments in groups and make mistakes within a second. But it takes them a long time to realize their mistakes and they only do so slowly.

Of course, panic buying is sometimes unavoidable. When the Songhua River was contaminated by toxic benzene from a factory in China’s Jilin Province in 2005, authorities stopped the supply of tap water to the city of Harbin without explanation, causing people to buy up bottled water. After the incident, the Chinese media sharply criticized the authorities. The media said the lack of proper explanation had fanned people’s fears and encouraged their panic buying of water.

But as we can see from the case in Harbin, authorities must remember that the lack of proper explanation only feeds skepticism and doubt and fuels panic buying.

*The writer is senior international affairs reporter of the JoongAng Ilbo.