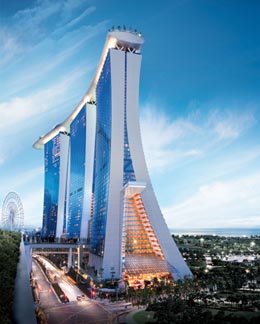 The Singapore Marina Bay Sands Hotel has 2,561 rooms and is known as a 21st century construction miracle.

Since Ssangyong E&C’s founding, the company has been awarded 135 construction projects in 19 countries totaling $8.1 billion. In 1998, it was ranked No. 2 in the hotel field by the world-famous construction magazine ENR. Ever since, Ssangyong E&C has been placed among the top.

With 2,561 rooms and slanting 52 degrees, the Marina Bay Sands Hotel looks like two cards leaning against each other. There is a swimming pool, observatory, garden, pedestrian walk, and restaurants in the Skypark, which connects the three hotels. At 12,000 square meters, the Skypark features a 70 meter long overhang that juts into the sky without any support underneath. Construction cost 1 trillion won and took 27 months.

Ssangyong E&C has also built luxury hotels in Indonesia, Japan, Guam, Dubai and Bali. In the 1980s it built the Marriott Hotel in Anaheim, Korea’s first overseas investment development project, and in the 1990s, it advanced to Dubai and built the Jumeirah Emirates Towers Hotel and Grand Hyatt Dubai, opening the market for Korean firms.

Ssangyong E&C specializes in luxury construction that considers everything from the basics to the environment. The Oceanfront Condominium on Singapore’s Sentosa Island was finished in 2010. The environment-friendly building was constructed to enable lower indoor temperatures of 29-30 degrees. It received the Platinum mark - the first hotel to do so - from the BCA Green Mark award from the Building & Construction Authority in 2007. The BCA is one of the major three environment designations along with America’s LEED and Britain’s BREEAM.

Ssangyong E&C is also focusing on high level, high value-added civil engineering projects. The Marina Coastal Expressway, awarded in November 2008 with a 820 billion won budget, was the largest overseas civil construction project of the year for a Korean company. In June 2009, the company received a 700 billion won order for a subway project, the biggest overseas rail project awarded to a Korean firm.

Ssangyong E&C plans to continue its business in its overseas market in addition to working to receive new orders from the Middle East, Africa and Guam, which are increasing large-scale projects. The company also plans to expand green construction, which is showing rapid growth.