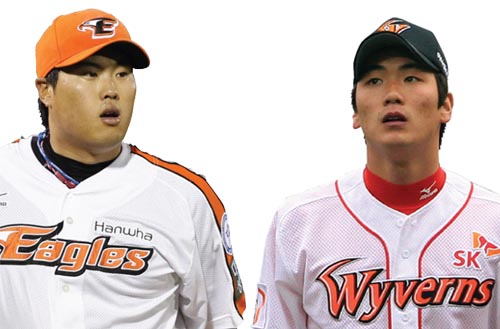 
For two top KBO starting pitchers, getting their first win of the season has been a struggle. But this week may be the time for both the Hanwha Eagles’ Ryu Hyun-jin and the SK Wyverns’ Kim Kwang-hyun to get going after two rather unsuccessful starts.

Both lefties are expected to start this week against teams they dominated last season.

Ryu, last year’s Golden Glove Award winner at pitcher, will start against the Wyverns tomorrow, while Kim, last season’s leader in wins with 17, is expected to pitch against the Nexen Heroes on Friday.

Ryu, who led the league in strikeouts (184) and ERA (1.82) last season, has lost both of his first two starts. In the season opener against the Lotte Giants on April 2, the 24-year-old gave up five runs in 4 1/3 innings. Ryu’s second start against the LG Twins last Friday was even worse. Ryu pitched six innings and allowed seven runs (one unearned), the most he’s surrendered in a game in his five-year professional career.

Kim’s performances were not much better. The 23-year-old gave up four runs in 6 2/3 innings against the LG Twins last Tuesday and had the opportunity to improve when he faced the Samsung Lions on Sunday. But he allowed three more runs in three innings.

“They are great pitchers, but there are concerns about their early performances,” Lee Hyo-bong, a commentator for MBC Sports, said to Ilgan Sports.

The statistics back up Lee’s claim. Ryu and Kim have given up the most walks per inning, respectively, so far this season, with the Eagles southpaw surrendering 10 walks in his two starts and Kim giving away nine free passes.

“They are showing signs of how pitchers look when they’re [in a little slump],” Lee said. “I think they feel the pressure.”

But their pitching coaches said Ryu and Kim are simply readjusting to the new season and should channel last year’s performances against the Wyverns and Heroes, respectively, to get back on track this week.

Ryu started against SK twice last year, winning both games and compiling a miniscule 0.56 ERA - one was a complete-game shutout in June, the other was a one-run, seven-inning affair in July.

“Our hitters were no match to Ryu last season,” Kim told Ilgan Sports. “I remember it was a superb performance. Even though Ryu has struggled in two games, we can’t underestimate him. He is still a great pitcher.”

Kim Kwang-hyun, too, will look to repeat his success against the Nexen Heroes this week. Last year, he allowed just one run on four hits in seven innings against the Heroes.

Kim was also on two game losing streak when he turned things around against the Heroes last year.

SK Wyverns manager Kim Sung-keun believes that the pitcher can get his first win against the Heroes.

“I am not really worried about him, but he needs to show stable performances to boost our team,” Kim said. “He should get a win in his third start.”