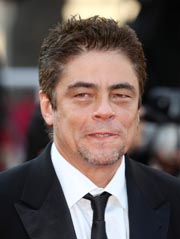 LOS ANGELES - Noted Hollywood lothario Benicio Del Toro is to become a father for the first time after a fling with one of Rod Stewart’s daughters, a spokeswoman for the actor said on Monday.

Del Toro, 44, is expecting a baby with Kimberly Stewart, 31. It will be the first grandchild for Rod Stewart, 66, who coincidentally became a father for the eighth time in February.

“Kimberly is pregnant. Benicio is the father and is very supportive. Although they are not a couple, they are looking forward to the arrival of the baby,” Del Toro’s publicist said in a statement. The baby’s due date was not known.

Del Toro has been romantically linked in the past to a slew of actresses including Scarlett Johansson, Alicia Silverstone, Heather Graham, Catherine Keener and Chiara Mastroianni.

The Puerto Rican native’s recent acting credits include “The Wolfman” and “Che.” He won an Academy Award in 2001 for his supporting role as a Mexican police officer in “Traffic.”

Kimberly Stewart is an occasional actress and model.