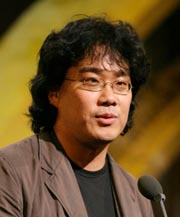 Korean director Bong Joon-ho will chair the jury that picks the winner of the Camera d’Or prize for best first film at this year’s Cannes film festival, organizers said on Thursday.

Bong, 41, whose films include “Memories of Murder” and “The Host,” is no stranger to Cannes, having premiered his most recent feature “Mother” in its Un Certain Regard section in 2009.

The festival on the French Riviera opens on May 11 with U.S. actor and director Robert De Niro presiding over the jury that will decide its most coveted Palme d’Or award.

Developing its online presence, the festival has also expanded its Web site (www.festival-cannes.org) with “An Illustrated History of Cinema Around the World” that highlights filmmaking in 12 countries - with more to follow.

“The Web-surfers of the world are not necessarily film buffs,” festival director Gilles Jacob said. “We have to get them interested, as well as cinema fans.”