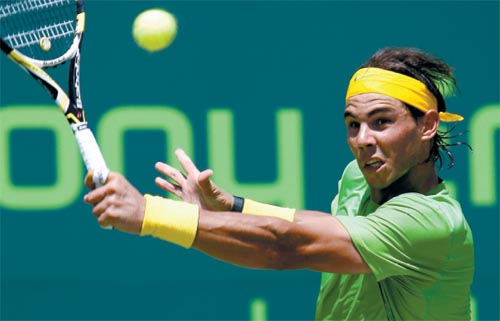 Rafael Nadal returns the ball to Novak Djokovic at the Sony Ericsson Open on April 3. Nadal is looking for his first win since last October. [AP/YONHAP]


MONACO - Top-ranked Rafael Nadal hopes the Monte Carlo Masters can once again be “the turning point’’ of his season as he bids to win his first title since last October following three straight defeats in finals.

The Spaniard did not won a title for 11 months last year heading into Monte Carlo, but won the tournament without dropping a set.

He then won at the Rome and Madrid Masters, before clinching his fifth French Open, Wimbledon and the U.S. Open.

“Winning the tournament without losing a set was the turning point of the season,’’ Nadal said Monday, adding that he will be hard pushed to repeat the feat of winning every match on clay, like he did last season.

Nadal has won six consecutive tournaments at Monte Carlo, the only man in the Open era to do that at the same tournament - a formidable span of 32 matches - since bursting onto the scene as a teenager with his first title in 2005.

“The last six years for me on clay, was, I never imagined what I [could do] from 2005-2010,’’ Nadal told reporters. “That’s something very difficult to repeat. We will see this year, I always say the same.’’

A year-ending loss to Roger Federer in the final of the ATP World Tour Finals, and consecutive defeats to No. 2 Novak Djokovic in recent Masters finals at the Sony Ericsson and BNP Paribas Open mean the 24-year-old Spaniard has not won anything since the Japan Open.

He will not have to face Djokovic in Monaco, as the Serb has withdrawn due to injury, but the seedings point to a potential final against Federer.

Nadal is chasing his 19th career Masters title, and opens his bid with a second-round match against the winner of Monday’s later match between Frenchman Julien Benneteau and Finland’s Jarkko Nieminen.

“When I start a tournament, I never think about Djokovic, Federer, about Andy Murray, just the first round,’’ Nadal said.

But his No. 1 spot is under threat from Australian Open champion Djokovic - who is 24-0 this year.

“[Djokovic] has a big advantage right now. He is a complete player and can play on many surfaces,’’ Nadal said. “I had two chances in a row, to win two tournaments and be closer to him. He’s in a perfect situation to be No. 1. He doesn’t have to defend a lot [of points] this month, I have to defend a lot.’’

Despite skipping Monte Carlo due to a sore knee, Nadal expects Djokovic to be a major threat on clay this year, even though he is 9-0 against the Serb on his favored surface.

“Always been a strong opponent on clay, he did two semifinals of Roland Garros, he won in Rome, played the final here, semifinal in Hamburg and Madrid,’’ Nadal said. “He is a fantastic player on all the surfaces, so for sure he is going to be one of the favorites for the clay-court season.’’

Nadal was leading in both finals at Miami and Indian Wells against Djokovic, but noticed a more resilient edge to him.

To remind him of what it’s like to win, Nadal has been watching videos of himself on clay.

“Just moments of myself [playing] because I have to remember what I did well. Last year here, a few years ago, just to remember how I play the points and the movement of the legs,’’ he said. “I came here [the first time] in 2003, just to come here and play the qualifiers was a dream for me.’’