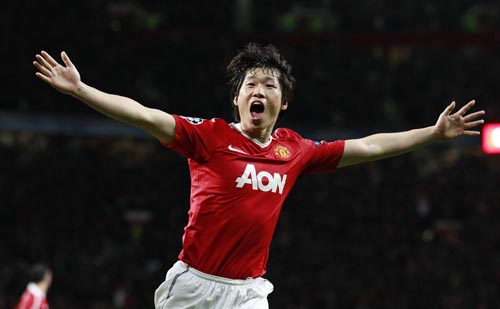 
MANCHESTER, England - Manchester United inflicted more Champions League misery on Chelsea on Tuesday as goal-poacher Javier Hernandez and Park Ji-sung secured a 2-1 victory to send them into the semifinals.

Mexican Hernandez struck before halftime and Korean workhorse Park sealed a 3-1 aggregate victory on a raucous night at Old Trafford after a spirited Chelsea momentarily leveled late on through substitute Didier Drogba, after the Londoners had been reduced to 10 men.

United, which beat Chelsea on penalties in the 2008 final and had carved out a 1-0 lead from last week’s first leg, absorbed plenty of pressure from Chelsea throughout a finely-balanced game in which the visitors had Ramires sent off for a second booking with 20 minutes remaining.

United manager Alex Ferguson, who has now steered United to the semifinals for the fourth time in five seasons, told Sky Sports afterward he thought his side deserved to win but scoring just 21 seconds after Chelsea was crucial. “That was the break we got in the game to be honest. I thought it was a soft goal for us to lose but Park’s record in scoring in big games is fantastic and he has done it again,” Ferguson said.

Chelsea manager Carlo Ancelotti, who will come under pressure after his side’s last realistic chance of silverware vanished, had no complaints.

“We came back into the game with 10 men but in the end it was not enough,” he said. “The game was balanced until the end; our performance was not so bad but Manchester United deserved to win.”

United’s Welsh midfielder Ryan Giggs said: “Over the two legs we were the better side. We played well down there and had a good game and stuck to it. Even though Chelsea put us under pressure, we scored a couple of great goals.”

United, chasing the treble of the Champions League, Premier League and FA Cup, will face Schalke 04 or Inter Milan in the last four, with the German side holding a 5-2 advantage over the Italians before yesterday’s late quarterfinal second leg.

United got the ball in the net first in the 26th minute with Hernandez’s diving header from a Wayne Rooney cross only for the linesman to flag for offside, even if it took some time for the home fans to realize it.

That frustration was forgotten two minutes before the break when John O’Shea sent a reverse pass to Giggs on the wing and the Welshman slid a pinpoint ball across the area where the lurking Hernandez, ruled just onside, crashed it into the roof of the net from virtually under the crossbar.

It was the Hernandez’s 18th goal of the season for United and came at the worst possible time for Chelsea, especially as they had produced more chances in a lively opening period.

Carlo Ancelotti was determined to inject more of a cutting edge straight after the break. He sent on Didier Drogba for Torres, who left the field to loud jibes of “what a waste of money” as United fans revelled in the Spaniard’s continued failure to score since his 50 million pound ($82 million) transfer in January from arch rivals Liverpool.

When Ramires was sent off for fouling Nani after 70 minutes Chelsea’s hopes looked shot but a fired-up Drogba had other ideas and the Ivorian controlled a ball with his chest and unleashed a right-footed shot under Edwin Van der Sar to level on the night, making the aggregate score 2-1.

Any hope Chelsea had of United buckling under pressure were snuffed out almost immediately, however, as Park netted less than a minute later to calm United’s nerves and put the outcome of the tie beyond doubt.

Meanwhile, Barcelona set up a probable Champions League semifinal clash with Spanish rival Real Madrid after Lionel Messi netted in a 1-0 win at Shakhtar Donetsk to complete a 6-1 aggregate success on Tuesday.

The World Player of the Year’s 43rd-minute strike, his ninth Champions League goal of the campaign, put the 2009 winners through to the semis for a fourth straight year.