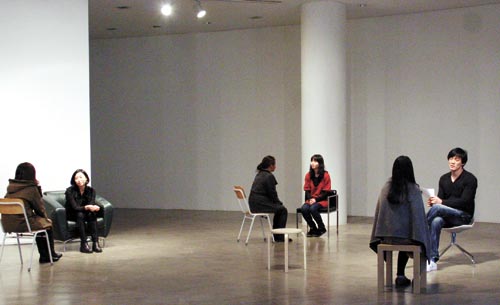 Artists rehearse on Feb. 28 for “Ordinary Strangers,” a new exhibit by Gimhongsok that runs through May 1 at Artsonje Center in central Seoul. Provided by Artsonje Center


Five actors, five essays and the audience are the key elements in a new exhibition titled “Ordinary Strangers” at Artsonje Center in central Seoul.

On the second floor of the gallery, five actors sit around the room and invite viewers to listen to their interpretations of a short essay. Afterwards, the actors encourage viewers to talk about what they’ve heard.

“This kind of impromptu conversation completely alienates the authentic meaning of the original and generates a new text,” Gimhongsok, the artist behind the new exhibition, wrote in a description of the work. “Here we cannot see any fixed ending. Rather, we discover a story structure that continues itself.”

The five short essays, all written by the artist, revolve around five words - chair, stone, water, people and concept - and the themes are discussed in relation to how they can be translated into an artistic concept.

In “Water - A Short Study on Materials That Cannot Be Configurated,” actress Kim Yun-a talks about three artworks created around the subject of water, including one piece consisting of 100 teardrop sculptures made of metal and crafted to scale.

Toward the end of the essay, she said, “When I am able to shed tears and feel, not love or sadness, but the actual tears themselves, this work will finally be finished.”

Afterward, she ended the performance with a minute of crying.

In “Concept - A Short Study on Expression,” actor Kim Gyeong-bum relayed Gimhongsok’s thoughts on performance art and its relationship to the theater.

“What is the difference between theater, dance and performance art?” he asked the audience.

“I don’t know the answer to this. But I wanted to create an ambitious project in which art is portrayed in a theatrical, impromptu and participatory way,” he said, echoing Gimhongsok’s objectives for the exhibition.

When he finished reciting the essay, Kim pointed to an audience member and asked about the last moment she felt completely happy. After she answered, he turned to another visitor and asked about her least favorite type of person. He allowed a brief moment of silence after her answer and then suddenly began singing an old Korean pop song.

“The conversation between the audience and the performers is the most important part of this exhibition,” Gimhongsok said. “The works are completed at the point of conversation, through which connections between the artist, performer and audience are made.”