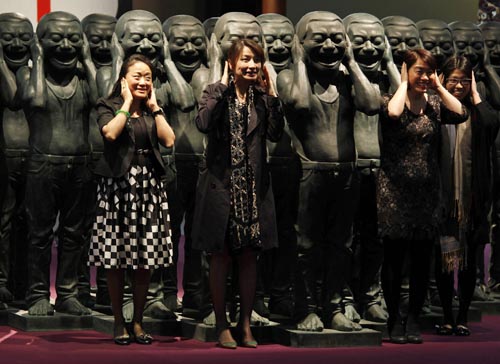 Visitors pose in front of “Contemporary Terracotta Warriors No. 9” by Yue Minjun ahead of Sotheby’s Spring Sales in Hong Kong on March 31. [Reuters/Bobby Yip]


HONG KONG - Auction giant Sotheby’s sold $447 million worth of Asian art, wine, watches and jewelry in its Asian spring sales, in another bullish showing for the Chinese art market despite weak results for a monumental collection of Chinese ceramics.

The HK$3.49 billion tally for its eight-day Asian sales in Hong Kong - now considered the world’s third most important art auction hub after New York and London - was the firm’s best season ever, underpinned by strong Chinese buyers and eclipsing even its blockbuster $400 million autumn season last October.

But beneath the results were signs of weakness in the red-hot Chinese ceramics market that is now a cornerstone of Sotheby’s biannual and closely watched Asian sales.

A major collection of Chinese ceramics, seen as one of the best to be sold in decades, failed to meet expectations in a conspicuous setback for the market, with 30 percent of the porcelain going unsold, while a collection of Chinese imperial objets d’art, including ancient jades, a gilt dragon and a golden robe, ended up 55 percent unsold.

The Meiyintang collection, assembled over half a century by Swiss pharmaceutical tycoons, the Zuellig brothers, was seen to be perhaps the best remaining classic Western collection of Ming and Qing ceramics, but flaws in a few major works, tighter credit requirements for buyers and sky-high estimates weighed on sentiment, dealers and collectors said.

“I think they [Sotheby’s] pushed a bit too hard on the prices,” said Nader Rasti, a Western dealer of Asian antiques.

One exceptional piece - an eight-inch tall Qing vase with a brilliantly painted pair of golden pheasants, near flawless save for a crack on the stem fastened by rivets - had been expected to fetch $23 million, but bidding spluttered after the opening price was set at HK$100 million.

The so-called “falangcai” vase with exquisite enameling, hammered off in 1997 for just HK$9 million, was sold privately after the auction for HK$200 million, Sotheby’s said.

A lustrous and silky smooth blue and white palace bowl from the famed Chenghua Ming period (1465-1487) also went unsold after failing to hit its reserve price of HK$80 million, but Sotheby’s said it, too, was sold privately for HK$90 million to an unspecified buyer.

“While we saw guarded bidding during last evening’s auction of the Meiyintang collection, the two top lots were sold immediately after the auction bringing us very close to our low presale estimate,” said Kevin Ching, the CEO of Sotheby’s Asia.

The brightest spot for Sotheby’s was an evening sale of Chinese contemporary art, from the landmark collection of Belgian collector Baron Guy Ullens, that raked in $54.8 million and saw rapid-fire bidding electrify a packed auction hall in a symbolic boost for the stricken market that has struggled to recapture its pre-financial crisis fervor.

The centerpiece, an early triptych oil painting, “Forever Lasting Love” by renowned Chinese artist Zhang Xiaogang, sold for $10.1 million, which Sotheby’s said was a record auction price for a contemporary artwork from China. Experts said Ullens’ stature as a Chinese art visionary had been a vital catalyst.