Taking the sleaze out of online dating

Taking the sleaze out of online dating 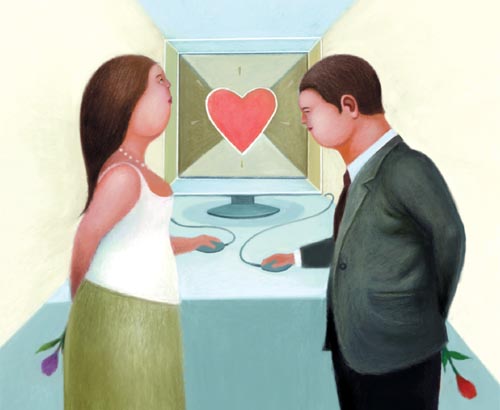 
The barrier between Koreans’ online and offline social lives is fast disappearing with the growing popularity of social networking services like Cyworld, Facebook and Twitter. For many, who you are and where you socialize is as much determined online as offline nowadays. And most people communicate with their friends over e-mail more often than they talk over the phone or see each other in person.

How people date, too, is being revolutionized by the Internet.

There probably isn’t a country riper for innovative solutions to dating than here. In Korea, there aren’t as many outlets to meet new people as in other societies, because Koreans’ social circles tend to be determined by work and school. It’s not easy to break into already established circles, and it’s even harder to form new ones.

The pressure to marry at a young age, especially for women, is palpable. All of this presents unique challenges for young people when it comes to dating. In fact, those serious about dating are usually set up on blind dates by people within their social circles or their family members, which somewhat limits the dating pool. The process is known as sogaeting in Korean.

“It’s not like meeting a total stranger. The person I’m being set up with is a friend of a friend or a friend of the family. It’s someone I know or I know of,” said Tony Lyu, a 31-year-old businessman. 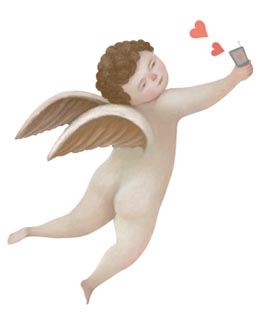 Bachelors and bachelorettes say the high number of dead-end sogaeting dates adds up to a lot of money spent on dinners and movie tickets. Plus, the pressure is there for additional dates, because the reputation of the matchmaker - often a close friend of one or sometimes both of the daters - is on the line.

The Internet, however, has started to break down those barriers, and that is having profound implications for how Koreans meet one another. Rather than being limited to dating friends of friends or friends of the family, young singles are increasingly going online to find their future spouses.

It wasn’t until recently, though, that Internet dating companies were able to dissociate themselves from a negative “meat market” image. Online dating services have long been associated with providing a platform for people to hook up, have sex and not worry about the hassles of relationships.

One online service that has established itself as a legitimate company for those on the lookout for “the one” is called i:um (i-um.net). Ieum is a Korean word for connection or relationship.

Users of i:um say it has vastly expanded the pool of people interested in serious relationships. The idea is simple. I:um replaces the nagging mother or overly helpful friend as the matchmaker. But unlike a mother - who often has a different concept of who would make an ideal partner for her offspring, perhaps inhibiting her ability to establish a successful match - i:um’s computers utilize data users provide to automatically select potential partners.

This isn’t KoreanCupid.com. An i:um user can only send only one message to another member after both agree to communicate. There’s not even a database of profiles to sift through. Registration takes hours and membership approval takes up to a month for men.

Once your profile is filled in and approval is granted, a computer program selects and sends you a profile - minus the person’s name and contact details - at 12:30 p.m. every day. The pair then has the option to click “OK” or “pass.” If both parties approve, their names and phone numbers will be released to the two members. From there, i:um’s work is done and fate takes its course.

In order for i:um to take the high road, it maintains a strict registration process to weed out those not interested in relationships. The profile page has nine fields, in which users must enter up to five keywords. For example, a member can select up to five words to enter into the “I like” field. Those fields are personal in nature and are designed to give members insight into each other’s personality. Two optional fields include the ever-important information on education and employment. The company does not make those mandatory because it wants to emphasize connections based on personality.

When this reporter registered with i:um, it took upwards of two days to consider what to enter on the profile page. Up to five photos can be uploaded. Waiting for membership approval is nerve-racking. That part of the process took another one and a half days. It was exciting waiting for the first profile to be delivered, and it didn’t take long before checking the daily selection became a ritual.

As much as the company tries to emphasize connections based on personality traits, this is Korea, and Koreans are practical when it comes to selecting mates. So to make their profiles “competitive,” members reveal their strongest assets in their profiles: for some, that is their education and employment status.

Further, some members slyly enter information into their profiles: in the category “I have,” one user put “Father who is a doctor,” while others entered “a diploma from Seoul National University,” “52 pyeong apartment overlooking Han River,” or “BMW M3.”

Not exactly the building blocks of long-term relationships.

“I just put down ‘luxury bags’ in the ‘I want’ category,” said Song Hye-min, a meteorologist who started using i:um last July. “I actually don’t own any luxury goods, so when the person actually met me, he would know I’m actually very frugal and not extravagant, which will be a pleasant surprise.”

But the Web site suggests people be up-front, letting other users know what they are really like before they meet. The men this reporter was introduced to through the Web site were straightforward.

“I won’t be able to take calls or return texts when I’m working or in class, so just wait if I don’t pick up the phone,” said one man. “Too much effort trying to look cute actually makes me nauseous,” said another. “I’m shy at first, but that does not mean that I’m not interested in you,” said the last.

“It’s good to have certain information before actually meeting in person. I can just make a decision if I like this person or not without wasting my time,” said Song.

The Web site maintains a ratio of about 1.2 men to each woman.

“Men sign up no matter what. So we only do marketing to attract women,” said i:um’s CEO, Park Hee-eun. The more women sign up, the more men it can accept.

The most exciting feature, say its users, is that the Web site offers them a chance to meet people outside of their social circles.

Meteorologist Song said her occupation was often the subject of conversation when connected through i:um. “People usually show a lot of interest in what I do. I guess it’s refreshing for them that someone who appears on television is sitting right in front of them,” she said.

I:um has benefited from a sterling reputation among those in their 20s and 30s, who perceive it as a place for “smart people” to meet. The founder is a graduate of Seoul National University and recruited her friends at the school to use the service.

“Even though it wasn’t intended, I think the rumor built a good image for the business, as it was spread by word of mouth,” said Park.

To increase trustworthiness, users can have their own information verified by the administrators of the Web site. When information such as school and company is verified, a mark will be shown on the profile indicating that the user’s data is accurate.

“This Web site has control over many things that people are worrying about. The biggest doubt people have would be the trustworthiness of the person they’re being introduced to,” said Lyu.

Many dating Web sites have sprung up recently, hoping to latch on to i:um’s success.

To be a member of i:um, users have to be single and be over the age of 19.

Because a high number of expats in Korea have inquired about the service, i:um is in the process of setting up a system to allow foreign nationals to register.

Thorough data is not available on the number of marriages the service can be credited with, since the onus is on the users to report the marriage to the company. No survey has been conducted.

So far, though, over 60,000 connections have been made (120,000 people have clicked “OK” to release their contact information).

“I openly tell my friends that I use this service, and even recommend others to use it. Going online for relationship is not something you need to hide from the public anymore,” said Song.