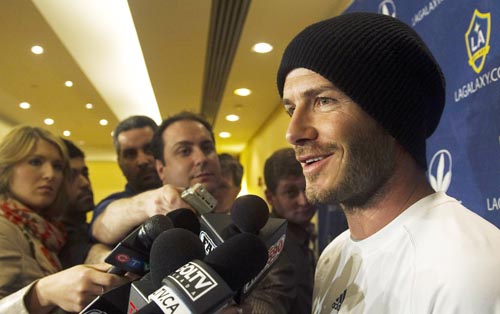 The Los Angeles Galaxy’s David Beckham speaks to the media during a news conference in Toronto on Tuesday. [AP/YONHAP]


TORONTO - David Beckham said Tuesday that it’s possible he could return to Major League Soccer next season after his five-year contract with the Los Angeles Galaxy expires.

“Yeah, there’s a chance,’’ said the former England captain, who turns 36 next month. “I haven’t made any decision about what I’m going to do after this year. I think it’s important that I just concentrate on my play this year.

“I feel fit, I feel good in games, I feel as if I’m performing well. I need to continue that and then in a few months I’ll think about what I want to do at the end of the day.’’

Beckham also told reporters in Toronto, where the Galaxy plays Toronto FC on Wednesday, that he’s interested in playing in the 2012 Olympics in London.

Beckham is entering the final year of the five-year, $32.5 million deal he signed upon joining the Galaxy, leading many to speculate about his future plans and whether he would take one last shot at playing with a top club in Europe.

Tottenham manager Harry Redknapp said in February he was interested in signing Beckham and was prepared to wait until Beckham’s contract with the Galaxy expires in November.

Beckham has shown touches of brilliance in his four years with Los Angeles, but he’s also been saddled with injuries. He tore his left Achilles’ tendon while on loan with AC Milan last March and missed most of the MLS season, as well as the World Cup in South Africa.

So far this season, Beckham has three assists with the Galaxy.