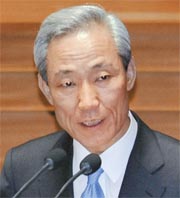 Baffled by the string of translation errors in the Korean translation of the Korea-EU free trade agreement, the government is seeking the public’s help to proofread the Korean-language version of the politically sensitive Korea-U.S. FTA.

“Public servants at the Ministry of Foreign Affairs and Trade are reviewing the Korea-U.S. FTA and also invited outside experts from law firms and customs brokerage companies to help in our review,” Trade Minister Kim Jong-hoon said yesterday.

“In addition to that, we will receive people’s opinions on the Korean-language accord. We will collect the public proposals and consult with experts to make necessary changes.”

The government began proofreading the accord in mid-March. An online channel will be open on the ministry’s FTA homepage (www.fta.go.kr) from tomorrow until April 28 to collect public input.

The English-language agreement signed in June 2007, the additional terms agreed upon during discussions in February and the Korean versions will all be posted.

Kim, chief negotiator of the Lee Myung-bak administration’s FTA endeavor, has been under growing pressure from opposition political parties over translation mistakes in free trade agreements with the European Union and the United States.

The ministry recently said 207 errors were found in the Korean-language version of the Korea-EU FTA, causing the legislature to retract the motion to ratify the treaty twice in order to make corrections.

“I won’t try to evade my responsibility,” Kim said yesterday, calling for lawmakers to ratify the FTA with the EU. “If [ratification is] delayed because of translation errors, it will be a grave mistake.

“For the past two months, we have done more than enough to find mistakes and corrected them as much as possible. Now the time has come to make a decision. I am more than willing to step down if that will help ratification.”

The European Parliament already approved the trade deal - in the EU’s 23 official languages as well as a Korean-language version - on Feb. 17. The Korean government has been urging the legislature to ratify the pact quickly so it can take effect on July 1 as scheduled.

A group of 40 liberal lawmakers said Monday that the four opposition parties will form an alliance and try to approve a motion to remove Kim during the April session.

Park also demanded that President Lee apologize to the public and fire the ministers.

Kim asked the nation to have more patience regarding the proofreading of the Korea-U.S. FTA.

“If there are many errors, it is possible to withdraw the ratification bill and resubmit an updated version, but no decision has been made yet,” Kim Jong-hoon said.

Unlike the Korea-EU FTA, the Korea-U.S. FTA has faced harsher protest in the legislature since it was signed in 2007. In December 2008, the ruling Grand National Party acted alone to table the ratification bill after a violent melee with opposition lawmakers.

The bill is currently pending in the National Assembly for a vote during the main session.

If the government retracts the bill to make translation corrections, the bill will include the additional terms agreed upon last year between Seoul and Washington, signaling another legislative nightmare.

Seoul and Washington have made a trade-off between cars and pork after a series of negotiations. While criticism rose in Korea that Seoul had made a one-sided concession, Kim defended the compromise as a win-win situation for both countries.