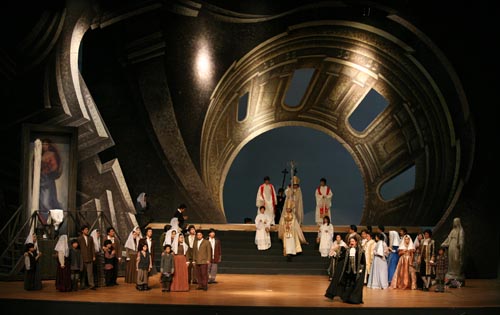 The Seoul Metropolitan Opera’s version of “Tosca” will run from April 21-24 at Sejong Center for the Performing Arts. Provided by Sejong Center


Operas by Giacomo Puccini will be dressed up in two different guises this week and next when two of the celebrated composer’s works come to the stage at the Sejong Center for the Performing Arts.

Traditionalists will want to head for “Tosca,” which opens Thursday, while the more adventurous will have something new to look forward to with the premiere of a musical version of the opera “Turandot” called “Turando.”

“Tosca,” Puccini’s dark tale of love, jealousy and death set against the backdrop of Napoleon’s invasion of Italy, tells the tale of singer Floria Tosca and her lover, painter Mario Cavaradossi. It is based on French playwright Victorien Sardou’s play “La Tosca.”

The performance will be staged by the Seoul Metropolitan Opera and conducted by Mark Gibson, who leads the Gyeonggi Philharmonic Orchestra.

Meanwhile, the Seoul Metropolitan Musical Theater is hoping its adaptation of “Turandot” will follow in the footsteps of Puccini operas that have found success after being turned into musicals, including “Miss Saigon” (1989), which is based on “Madama Butterfly,” and “Rent” (1996), based on “La Boheme.” 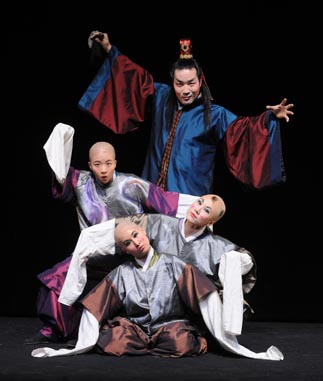 Characters pose in the musical “Turando,” which runs from April 29 to May 25 at Sejong Center for the Performing Arts’ M Theater.

As in the original opera, the musical is about Turandot, a princess who is possessed by the spirit of an ancestress. The ancestress, who was raped and killed by an invading foreign prince, vowed that no man will ever have Turandot. The story begins with an announcement that any man who wishes to marry Princess Turandot must solve three riddles or die. Her primary suitor is Prince Calaf of Tartary, who solves the riddles but now must win the princess’ heart.

The SMMT production focuses more on the pain Turandot goes through as she learns of her grandmother’s fate and then struggles to overcome the curse that was placed on her in order to overcome her resistance to love.

“Turando,” the name of this version, is a Chinese word that means “orchid painting” and refers to the orchid flower’s resistance to pollination.

The musical is the first piece directed by Kim Hyo-kyung since he took over as SMMT artistic director in October. A veteran of the theater, Kim was named Director of the Year by the National Theater of Korea in 1994.

Kim began developing the musical in 2008, when he was chair of the Seoul Institute of the Arts. The Sejong Center said in a press release that Kim is “determined to show that a solid plot and talented musical actors are enough for a hit production, without the celebrity casting that is in vogue in Korean musical theater today.”

The music was written by Kim Min-jung and Cho Won-young and arranged by Hong Seong-gyu, a professor at Kyung Hee University. It will be played live by a small orchestra.

In an unusual move, the creative team has announced it will actively solicit feedback from the audience during the performance run. In addition, it is offering a discount of 50 percent from April 29 to May 1 and a 30 percent discount from May 3 to 5. On those days, evaluation sheets will be distributed before the show and audience feedback will be reflected in subsequent productions. To encourage audience members to see the results of their input, viewers who see the show twice will be eligible for a 50 percent discount. Die-hard fans who want to see the show three times will receive a free ticket on their third visit.