Obamas to appear on a final Oprah episode

Obamas to appear on a final Oprah episode 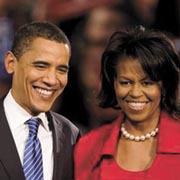 CHICAGO - President Barack Obama and first lady Michelle Obama will appear on one of the final episodes of “The Oprah Winfrey Show.”

Harpo Productions and the White House confirmed Tuesday that the Obamas would tape the episode April 27 at Harpo Studios in Chicago. The show is to air on May 2.

Winfrey announced live on the show in November 2009 that she would end its run after 25 years. She has since has launched cable’s Oprah Winfrey Network. The last episode of “The Oprah Winfrey Show” will air May 25.

The final episode brings an end to what has been television’s top-rated talk show for more than two decades. It airs in 145 countries worldwide.