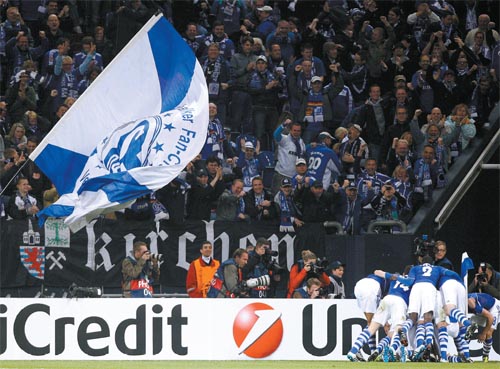 Madrid never looked likely to give up its 4-0 advantage over Tottenham from the first leg and a second-half howler from Spurs goalkeeper Heurelho Gomes gifted Cristiano Ronaldo the only goal of the game, giving Real a 1-0 win at White Hart Lane.

Madrid will face archrival Barcelona in the semifinals, while Schalke takes on Manchester United.

While United will be favorites against the German club the very fact that Schalke are in the semifinals will attest to the difficulty that will be faced by United. The matchup of the two Spanish powers will however be the glamour tie. It also sets up four “clasico’’ matches in 18 days, with Madrid and Barcelona also squaring off in the league and Copa del Rey final.

While Inter may have held out faint hopes of overturning its deficit, Raul Gonzalez all but snuffed it out when he gave Schalke the lead in the 44th minute, leaving the Italians needing five goals to advance. Thiago Motta equalized in the 49th minute but Benedikt Howedes scored the winner in the nine minutes from time as Schalke reached its first Champions League semifinal.

“What can you say, we really won it last week,’’ Schalke coach Ralf Rangnick said. “We defended very well tonight, we allowed maybe two chances. We could have won [bigger] again if you count all the chances.’’

At White Hart Lane, Madrid soaked up early pressure from Tottenham, which had a goal disallowed for offside and a penalty appeal turned down off in the first half.

Ronaldo then deflated the hosts when he sent a swerving shot from nearly 30 yards that went straight at Gomes, who fumbled a routine catch and watched the ball roll over his shoulder before bouncing slowly over the line.

The mistake was so glaring that even Madrid goalkeeper Ikar Casillas just sadly shook his head in sympathy rather than celebrating the goal.

It was Ronaldo’s 40th goal of the season and left Tottenham playing for pride alone.

Spurs striker Roman Pavlyuchenko had a chance to equalize in the 58th minute when Rafael van der Vaart picked out the Russian with a cross into the area but his header was off target. Jermain Defoe then tested Casillas with a well-struck shot from outside the area in the 63rd, forcing the Spanish goalkeeper to dive low and deflect the ball out for a corner but the result was never in doubt.

“We lost to a better team but we’re disappointed to go out,’’ Tottenham winger Gareth Bale said.

The loss ended Tottenham’s first campaign in the Champions League and the club now faces a tough task to finish in the top four in the Premier League to earn another spot next season. Spurs are currently in fifth place, with seven games remaining, three points behind Manchester City but with a game in hand.

“The team will give it their best shot, it is going to be tough,’’ Tottenham manager Harry Redknapp said. “We have to finish above Man City and Chelsea, that is our aim, it is not going to be easy but that is what we want.’’

In Germany, Schalke waited patiently for chances to counterattack against Inter and Jose Manuel Jurado eventually set Raul free with a ball through a huge opening in Inter’s defense. The former Madrid striker calmly rounded Julio Cesar to take his Champions League record tally to 71 goals.

Motta slotted home the equalizer after Lucio found him at the far post with a header after a corner but it was too little too late. Schalke used another counterattack to get the winner, with Raul sending a long ball behind Inter’s defense for defender Howedes to drive past Julio Cesar.

“We showed in both matches how much potential we have in our team,’’ Schalke defender Christoph Metzelder said. “We wanted to win, we were not happy with 1-1.’’