Ancient texts looted by France are home at last

Ancient texts looted by France are home at last 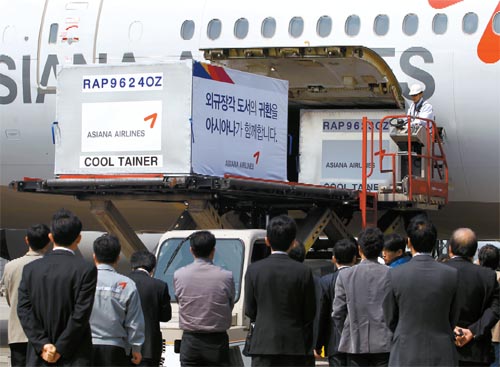 The first batch of the 297 volumes of Korea’s ancient royal protocol being returned from France arrives at Incheon International Airport yesterday. The manuscripts were then moved to the National Museum of Korea. The batch contained 75 manuscripts in five specially made crates that controlled humidity and temperature. [YONHAP]

Plundered by the French military 145 years ago, and the object of two decades of diplomatic wrangling between Paris and Seoul, 75 of 297 manuscripts arrived at Incheon International Airport yesterday and were delivered to the National Museum of Korea.

They were transported in five specially made crates that controlled temperature and humidity. The other books will come in three shipments through May 27.

Minister of Culture, Sports and Tourism Choung Byoung-gug welcomed the Oegyujanggak manuscripts at the museum. When asked about the fact that the manuscripts are technically being “leased” to their homeland, and that the lease has to be renewed every five years, Choung told reporters, “Regardless of the words used in returning the books, it is practically a permanent redemption.”

Choung said the word “lease” is used as a political convenience, and it allows Paris to comply with French laws that only allow the temporary lending of cultural assets.

The Oegyujanggak books recorded the protocols and ceremonies of the Joseon Dynasty and were kept at Oegyujanggak, a Joseon Dynasty-era royal library located on Ganghwa Island, Incheon. Many of the manuscripts have copies in Korea, but 30 are unique.

One Oegyujanggak book was returned in 1993 by then-French President Francois Mitterrand.

The books will be shown to the public at the National Museum of Korea from July 19 to Sept. 18. The museum then plans to organize a tour of the manuscripts across the nation, including Ganghwa Island. The museum will also digitalize all the books.

Korea’s first official request for the books’ return was made in 1991.