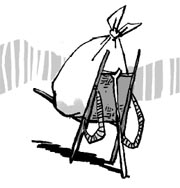 Humans are creatures of labor. “A day without work is a day without food,” Tang Dynasty Zen master Baizhang Huaihai famously said. He made a point to never miss group work at his temple, even when he was 90 years old. His students were so concerned about the health of the aging monk that they hid his farming tools, but true to his word, he began fasting when he was not working. In the 1920s, Korean Zen master Hakmyeong advocated the “Half Farming Half Zen” movement at Naejang temple, practicing Buddhist meditation and mundane labor. Buddhism guides believers to perceive labor as a means of practicing Zen teachings.

In Christianity, labor is an order defined for humans by God from the beginning. Adam lived in the Garden of Eden, but paradise was not a place for playing and eating all day long, it was a place for work. Adam was created as a farmer and when he was expelled from the Garden of Eden, he was forced to work for food. “Through painful toil you will eat food from it all the days of your life” (Genesis 3:17.)

Nevertheless, human history is littered with examples of labor being considered low and vulgar and being forced on certain groups of people. In Korea, the history of forced labor goes all the way back to the ancient Gojoseon period (2333 BC), when the Eight Prohibitions stated, “A thief shall be made a servant.” In ancient Greece and Rome, free men considered labor the exclusive duty of the slaves and in Sparta, the number of slaves carrying out labor ordered by the state was larger than the total number of free men. Corvee is a form of unpaid labor between political rulers and their subjects, or landlords and tenant farmers. Writer Han Seol-ya’s 1930s trilogy “Muddy Stream” tells the story of tenant farmers who were ordered by the landlord to rebuild a levee destroyed in a flood without getting paid.

Housekeeping duties and childcare within a household is also a form of unpaid work that does not yield monetary compensation. On average, Korean men spend less than one hour a day doing work around the house; the lowest level in the world according to a survey conducted by the Organization of Economic Cooperation and Development. The presence of a father figure in the family may be in danger. Perhaps, some may want to force men to take on more domestic responsibilities. Forced, unpaid labor for the family will make men display more love and care for their family.