Looking for Mr. Right, but finding a new job

Looking for Mr. Right, but finding a new job 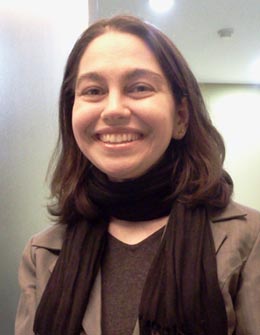 Rebecca Woolfe is a researcher for matchmaking site Sunoo. By Yim Seung-hye

When Rebecca Woolfe, 32, went to an event organized by matchmaking agency Sunoo in 2009, in the hope of finding Mr. Right, the New York native left not with a date but a new job.

Woolfe has now been working at Sunoo for a year and a half as a researcher on its “global team” and a matchmaker for foreigners. She researches cross-cultural aspects of people’s attitude towards dating and marriage.

“I saw an ad in a magazine for a dinner event that was going on for foreigners here. I was personally interested to be honest,” said Woolfe. “At the event, I found out that Sunoo has a research division and because I studied counseling and researching, I thought that maybe it would be agood fir for me.”

Before working for Sunoo, Woolfe was an English instructor at a university in Korea.

Sunoo boasts 100,000 members worldwide. A distinct characteristic of the company is its Web site, Couple.net, a hassle-free way to find a date or meet a long-term partner.

“I think aspects in Korean females such as managing households well and smartly handling finances are what attract foreign males, while foreign females who get attracted to Korean males say it’s because Korean men are more dedicated to the family and more responsible financially,” said Woolfe.

Matchmaking services have been on the Web for years but Woolfe says that Sunoo’s system is not a random matchmaking Web site but “a scientifically programmed one.”

According to Woolfe, Sunoo was responsible for matching 23,000 couples who went on to get married in the 10 years before they launched their Web site last year. “So the company analyzed the data and came up with an algorithm, which is now patented,” Woolfe said. That patented algorithm has been incorporated into the company’s online system.

Another distinction of Sunoo is that there’s no membership fee.

She said other companies charge thousands of dollars annually but don’t guarantee anything. “Let’s say you are promised 36 matches but if the other party doesn’t want to meet then you end up meeting nobody. When the year is over you can end up paying thousands of dollars for nothing,” said Woolfe. “It’s a lose-lose situation because the company used all their resources and hired managers to match-make but It just didn’t happen and that is the subject of complaints.”

That’s why Sunoo gave up on its 19-year annual membership “match-consultant-matching” system last year, replacing it with a system based on recommended matchups.

She said the company only charges after a successful match is made so you know exactly where your money is going. Currently the rate is 30,000 won ($28.)

Some critics decry online dating because of the high number of false member profiles but Woolfe says Sunoo introduced a “credibility system” to prevent such fraud.

“Our members don’t have to be wary of fraud because we have a profile scoring system. The more documents you submit as proof of your identity - such as a copy of your diploma or proof of employment - the higher the score you get,” said Woolfe. If a member submits all the required documents, he or she will get a score of 99, which is then posted on their profile.

Profiles list more than 330 pieces of information - everything from height, weight, blood type, family status and monthly wage to personality preferences and academic credentials. Profiles even include drinking and smoking habits.

“Based upon your profile, you are either matched automatically with the most compatible party on a weekly basis or you can search on your own by filtering and sending meeting requests,” said Woolfe.

The company also offers events for English speaking members. “Recently we held an event for any singles who speak English. The fee was 100,000 won but members were allowed to meet 15 people through speed dating with a full course meal and wine,” said Woolfe.